Fresh snow and rain in Kashmir amid orange alert 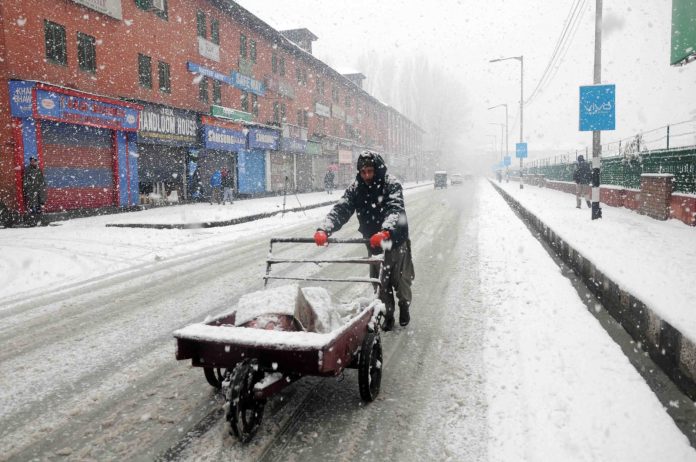 Parts of Kashmir Valley including famous resorts of Gulmarg and Pahalgam received fresh snowfall while rains lashed plains on Friday. Amid ‘heavy-very heavy’ snow forecast, the weather office here has issued orange colour weather warning for today and Saturday which stipulates need to be prepared and keeping vigil against severe weather.

“IMD issues ORANGE Colour weather for J-K for 7th and 8th January,” an official of the MeT department said in a statement here.

Currently, he said, it was snowing in Gulmarg and Pahalgam besides upper reaches and raining lightly at most places of plains of J&K with thunderstorm in Katra and some other places of Jammu region. “Expect gradual increase in rain/snow intensity as the day progresses with main intensity of heavy to very heavy rain/snow during 7 January (night) and 8th,” he said, adding, “there will be gradual improvement from 9 January morning onwards in J-K.”

He said the weather system may affect surface and air transportation, mainly on Saturday. “It may cause avalanche/landslide in vulnerable spots.”

The MeT office has urged people not to venture in avalanche prone areas, follow traffic advisory seriously as well as maintain proper ventilation of their rooms.

The summer capital of J-K, he said, recorded a low of 2.6°C against previous night’s 0.3°C. It was 4.5°C above normal for this time of the year in Srinagar, he said.

Gulmarg, recorded a low of minus 5.5°C against minus 3.4°C on the previous night at the world famous resort, he said.

Qazigund received 4.6mm of rain in the last 24 hours while the gateway town of Kashmir recorded a low of 0.4°C, same as witnessed on the previous night, he said.

Pahalgam, the famous resort in south Kashmir which had 0.4cms of fresh snowfall recorded a low of minus 0.4°C against minus 0.8°C on previous night, he said.

Kokernag, also in south Kashmir, recorded a low of minus 0.2°C against minus 0.7°C on previous night, the official said.

Kupwara town in north Kashmir, recorded a minimum of 0.8°C against 0.0°C as on the previous night, the official said.

Jammu, with 4.6mm of rain, recorded a low of 11.1°C, up eight notches from the previous night and normal of 7.3°C for the J-K’s winter capital during this time of the year, he said.

Ladakh’s Leh recorded a low of 1.5°C against last night’s minus 7.6°C while Kargil automatic station recorded a minimum of minus 9.8°C while Drass recorded minus 12.4°C, the official said. (GNS)