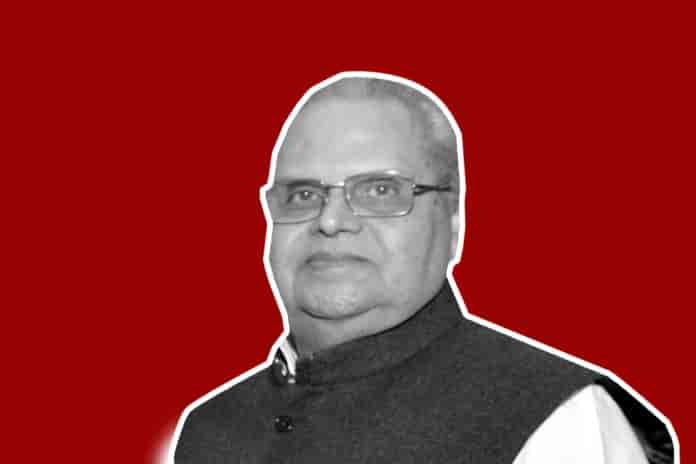 The CBI has “examined” former governor Satya Pal Malik in connection with two graft cases registered in Jammu and Kashmir in April based on allegations levelled by him, officials said.

They said the CBI team took details of his observations earlier this week, they said. Malik was examined after his five years tenure as Governor ended on October 4, they said.

He was appointed as Governor of Bihar in 2017 after which he was sent to Jammu and Kashmir in 2018 where he oversaw the revocation of Article 370 in August 2019. Malik, who had issued statements criticising the Centre during farmers’ agitation, was moved to Meghalaya where his five-year tenure ended this month.

Malik had claimed that he was offered a Rs 300 crore bribe for clearing two files during his tenure as the governor of Jammu and Kashmir between August 23, 2018 and October 30, 2019. “After going to Kashmir, two files came to me (for clearance), one belonging to Ambani and another to an RSS-affiliated man who was a minister in the previous Mehbooba Mufti-led PDP-BJP coalition government and claimed to be very close to the prime minister (Narendra Modi),” he had said.

“I was informed by secretaries in both departments that there is a scandal and I accordingly cancelled both deals.

“The secretaries told me that ‘you will get Rs 150 crore each for clearing the files’ but I told them that I have come with five kurta-pyjamas and will leave with that only,” Malik had told a gathering at an event in Jhunjhunu in Rajasthan in October last year. In April this year, the CBI registered the two FIRs in connection with corruption allegations levelled by Malik in the awarding of contracts for a group medical insurance scheme for government employees and civil work worth Rs 2,200 crore related to the Kiru hydroelectric power project in the erstwhile state.

The central agency has booked Reliance General Insurance and Trinity Re-Insurance Brokers Limited as accused in its FIR related to a controversial health insurance scheme for Jammu and Kashmir government employees reportedly cleared by Malik in the state administrative council meeting on August 31, 2018.

“…unknown officials of Finance Department of Government of Jammu and Kashmir by abusing their official position in conspiracy and connivance with Trinity Reinsurance Brokers Ltd, Reliance General Insurance Company Ltd and other unknown public servants and private persons have committed the offences of criminal conspiracy and criminal misconduct,” the FIR alleged.

They caused “pecuniary advantage to themselves and wrongful loss to state exchequer during the period 2017 and 2018 and thereby in this manner cheated the Government of Jammu and Kashmir”, it alleged.

It was alleged in different quarters that there were glaring deviations from the government norms in the contract awarded to Reliance General Insurance like the absence of an online tender, removal of an original condition that the vendor should have experience of working in the state and companies having turnover of Rs 5,000 crore among others.

“The case was registered on the request of Jammu and Kashmir government on the allegations of malpractices in the award of contract of J&K Employees Health Care Insurance Scheme to private company and release of Rs 60 crore (approximately) in the year 2017-18,” CBI Spokesperson R C Joshi had said.

After allegations of irregularities surfaced, the scheme, which was rolled out on September 30, 2018, was scrapped, officials said.

“The governor has approved foreclosure of the contract with M/s Reliance General Insurance Company (RGIC) for implementing group mediclaim health insurance policy for the employees and pensioners in the state,” a Raj Bhavan spokesperson had said on October 27, 2018.

He had said the matter was referred to the Anti-Corruption Bureau for examining the entire process to see whether it was conducted in a transparent and fair manner.

In its second FIR pertaining to the alleged malpractices in the award of contract for the civil works package of Kiru hydroelectric power project, the CBI said guidelines related to e-tendering were not followed. “The case was registered on allegations of malpractices in the award of the contract worth Rs 2,200 crore (approximately) of civil works of Kiru Hydro Electric Power Project(HEP) to a private company in the year 2019,” Joshi had said.

“Though a decision was taken in the 47th Board meeting of CVPPPL (Chenab Valley Power Projects Ltd) for re-tender through e-tendering with the reverse auction after the cancellation of the ongoing tendering process, the same was not implemented (as per the decision taken in the 48th board meeting) and tender was finally awarded to Patel Engineering Ltd,” the FIR alleged. (PTI)