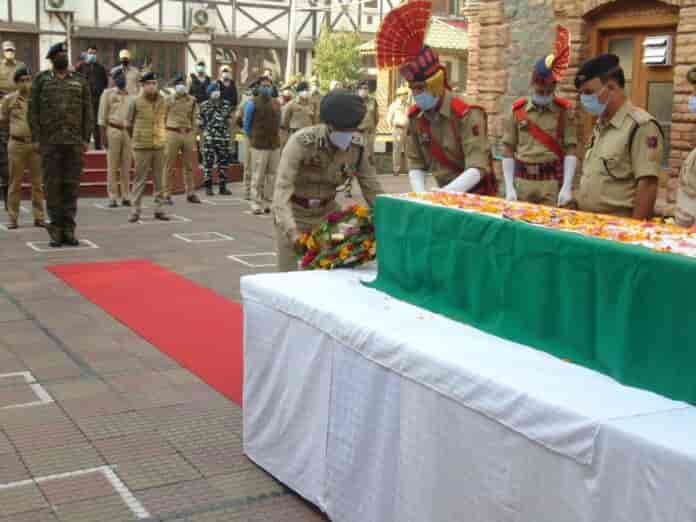 Srinagar : A pall of gloom descended over the family members of slain cop Altaf Hussain of Eidgah, who was killed in a shootout at Nunner, Ganderbal, when his body reached his native area in Eidgah, Srinagar.

Mr. Altaf, died while retaliating to a militant attack in Nunner, Ganderbal Tuesday evening. Militants attacked protected person and the vice-president of Bharatiya Janta Party for Ganderbal district Ghulam Qadir. In the attack one militant was killed by Mr. Altaf, who sustained fatal injuries and died at Sher Kashmir Institute of Medical sciences Soura.

Earlier, in the day, floral tributes were paid to the cop at the wreath laying ceremony held at DPL Srinagar where DGP Dilbagh Singh, IGP Kashmir Vijay Kumar, other officers of police and senior officers of army, and CRPF were present.

Later, the body of Mr. Altaf was handed over to his family at Rathpora, Eidgah were women were seen wailing and beating chests. Hundreds of people assembled at martyr’s graveyard Eidgah where funeral prayers of slain Altaf were held with moist eyes. He was laid to rest at this ancestral graveyard at Eidgah. Meanwhile, DGP Dilbagh Singh inaugurated Jashn-e-Dal, a three-day event and dedicated the same to slain cop Altaf—(KNO)

Previous articleKashmir’s last houseboat maker might quit. Will Dal Lake change forever?
Next articleSopore woman dies a week after setting herself ablaze at her in-law’s house