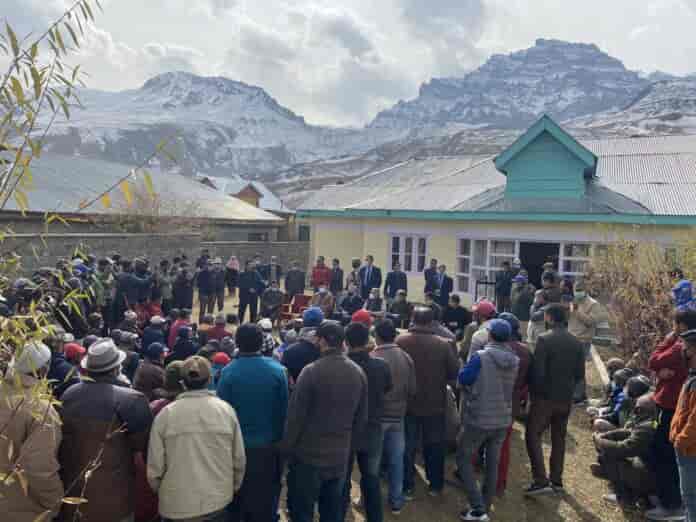 Srinagar: The People’s Alliance for Gupkar Declaration (PAGD) delegation led by Omar Abdullah, Friday stated that the fight against last year’s 5 August decision by New Delhi will continue as the decisions were imposed on J-K people illegally.

Addressing a gathering in Drass, Mr. Omar, according to the news agency—Kashmir News Observer (KNO), said that no elected assembly or chief minister of the state signed the

He said that on the directions of PAGD President Farooq Abdullah and vice president Mehbooba Mufti, a combined delegation reached Kargil yesterday to meet people there.

He said the delegation has come to hold talks with the people of Kargil which will add more power to fight against the last year’s 5 August decision.

“It was a different feeling yesterday when we entered in Kargil. All names linked to J-K have been removed and we felt guests in Kargil,” he said.

Referring to Punjab, he said that like it (Punjab) was bifurcated into three different states, people supported move likewise same was adopted in Bihar.

“It was for the very first time that such a big decision was been taken without the people’s consent and implemented by force since the decision wasn’t from the local assembly or parliament. Neither the signatures were done by the elected chief minister of the J-K,” he said, adding that “The powers were taken by the governor of the erstwhile state of Jammu and Kashmir illegally and without talking to us and the state was divided by downgrading it into two separate UTs.”

Mr. Omar said that they are totally not ready to accept the decision announced on 5 August last year and that’s why all opposition parties have come together leaving behind their political rifts and ideologies.

“Not for the chair, power or government formation but all the regional parties have joined hands  with sole aim to get back what has been snatched and ensure restoration of everything that has been taken away,” he said.

He said that with support from the people of Drass and Kargil PAGD will fight for it and achieve the goal and act as a voice for this area.

Sources said that  at the end the delegation leaders concluded the address to people with a slogan—“Jammu Kashmir, Ladakh Kargil Aik Tha Aik Rahega’ (J-K, Ladakh and Kargil were one and will remain as one). Large number of people responded to the slogans with their hands high—(KNO)

Previous articlePAGD condemns blocking of Farooq Abdullah from praying at Hazratbal
Next articleMan beaten to death, burnt by mob for “desecrating” Quran in Bangladesh

The Crime Branch Kashmir (CBK) on Saturday filed a final charge sheet against two accused persons before the court...
Kashmir