Father of six booked under PSA for tenth time, shifted to Kotbalwal jail 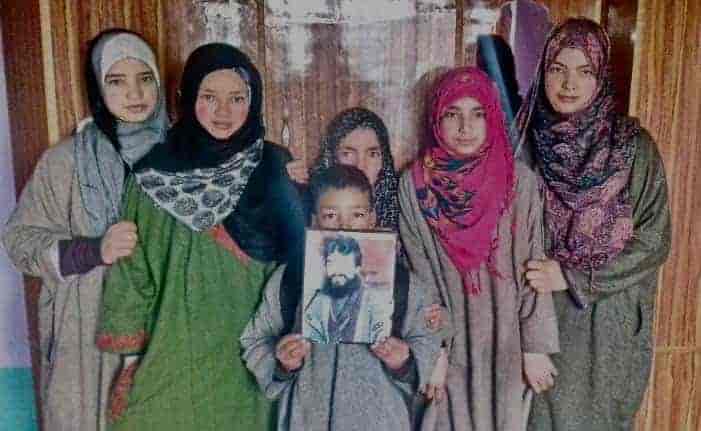 by Nasir Khuehami
Srinagar: Authorities have booked a man, father of six children from Hajin area of Bandipora under Public Safety Act (PSA) for 10th time in a row over his alleged involvement in anti-national activities.
Asaadullah Parray, resident of Hajin Bandipora, is district president of Muslim League led by Masrat Alam Bhat was arrested in August 2015 for his alleged involvement in anti-government activities and was shifted to Kotbalwal jail Jammu.
An official said that Assadullah Parray has been booked under PSA vide No. 26 DMB/PSA/18 dated 12-12-18 under FIR No.116/13.
Parray’s six children are surviving on hard means. The children have already lost their mother in 2012 and father has remained in jail much of the time since.
One of Parray’s daughters is suffering from a skin disease that requires her to visit hospital for treatment. Another daughter is suffering from trauma and is also on medication.
Meanwhile, Muslim League spokesperson condemned slapping of Public Safety Act on Parray, termed it as ‘worst form of State terrorism and human rights violation’.
He said that “police has crossed all the limits. With these tactics, they can’t break Political will of inacracted Assadullah Parray.” Mariya, elder daughter of Parray said that, “My father was arrested in 2015. He has dedicated his life for the freedom Struggle of Kashmir.”
Maria, the eldest sibling among six children, has been taking care of the family in her father’s absence.  Earlier, Parray has served 13 years in jail for his association with the pro-freedom movement.
“He faced the worst victimisation during the reign of army-backed counter-insurgency “Ikhwan” in mid-90’s. Parray was associated with Jamaat-e- islami before joining the Muslim League,” one of gis relatives said.
Earlier Member of Legislative Council (MLC), Yasir Reshi has also demanded immediate release of Parray.
Reshi had said that there was no case registered against him as all the cases lodged against him were quashed by the court. He said that Malik is really sincere towards ending the sufferings of people the he must release all the prisoners against whom no cases are registered. (KNO)