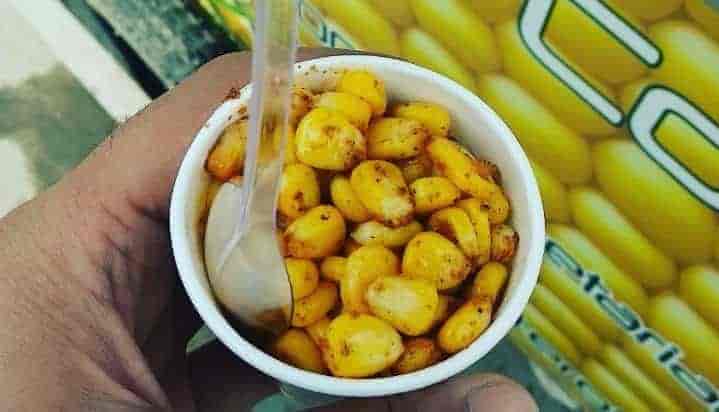 With the aim to generate employment in Kashmir Valley, two 27-year-old young engineer friends – Tehleel Khajawal and Rizwan Alam Khan, from Srinagar, turned partners to start a business called Corn On The Go.

After completing engineering from the S. S. M. College in Pattan, the duo started their respective jobs. A mechanical engineer, Rizwan, then 24, moved to Qatar to work in a construction company. While as Tehleel joined a private telecom company in the state, as an Electronics and Communication engineer.

Both found it hard to work in the private sector and also the wages were not satisfactory. After a few months, Tehleel quit his job. While he started looking for alternatives, Rizwan was also seeking something different for himself than working as an employee in Qatar.

For Rizwan, Qatar was an utopian world, the culture had brought a different hope in his life but still his heart was back in Kashmir.

“He was emotional and a home-loving person, just like any other Kashmiri,” says Tehleel. “Since our childhood we were not able to experience a good life. Rizwan used to get flashbacks of curfews, shutdowns, restrictions, killings etc. He always had a dream to see Kashmir like other countries – peaceful and safe.”

Once in Qatar, Rizwan went to watch movie in a multiplex theatre. It was there when a man selling sweet corn on a decorated cart caught his attention. He had seen popcorn carts before too at various places but the idea of it becoming a possible business venture had never brushed his mind.

After the movie, he shared the idea with Tehleel and both agreed to initiate the same venture in Kashmir.

“It took us one year initially to conduct a market survey for this business,” says Tehleel.

In August 2017, they started a three-month trial to see market reaction. “Finally, we installed three mobile sweet corn carts in Srinagar city,” he adds, proudly. “It received warm response from people within a short period of time. Our business started getting positive reactions.”

For them, the idea was to bring something new to Kashmir, which can help replace the unhealthy junk food as well as create some jobs too. Except Kashmir, such carts are found in every other state but the young men took a risk while other’s of their age are searching for jobs.

Finally, the venture is established

In December 2017, they ordered three more mobile carts and placed them in the most crowded areas especially near the education hubs. “When All India Council for Technical Education (AICTE) banned junk food near colleges and universities [in September 2017], this step helped us to maintain the same. We were selling sweet corn, which is healthy and hygienic food,” says Tehleel.

The duo started the business with an initial capital of rupees 400,000 ($5836) and worked on minimum profit basis. Today, the business is effective and on an average, one cart gets the company profit of over rupees 1000 ($14.5) a day.

The company now has six carts installed in different areas, which have generated six jobs for boys who are running each unit. “We have hired local boys for these carts, who are running them on salary plus commission basis,” he adds. Each cart employ earns a monthly salary of rupees 6000 and total commission of rupees 7500, making their monthly earning rupees 13500 ($200).

Tehleel says that usually people are very inclined to crispy food and their taste fluctuates everyday, so they have now added different flavors in the corn – Ranch Masala, Cream Vanilla, Lemon, Mint etc. to serve customers of different taste. “This is Kashmir’s first mobile cart sweet corn and we have high-quality corn from Al-Kabeer, international sellers.”

Though, the frequent political instability in Kashmir Valley affects every business sector due to uncertainty, still the duo is satisfied with the functioning and growth of their business.

“Day by day this chain is growing and after Eid in August, we are planning to boost this by setting up 15 more bicycle carts in various areas so that we can provide more jobs and expand our business further,” says Tehleel.