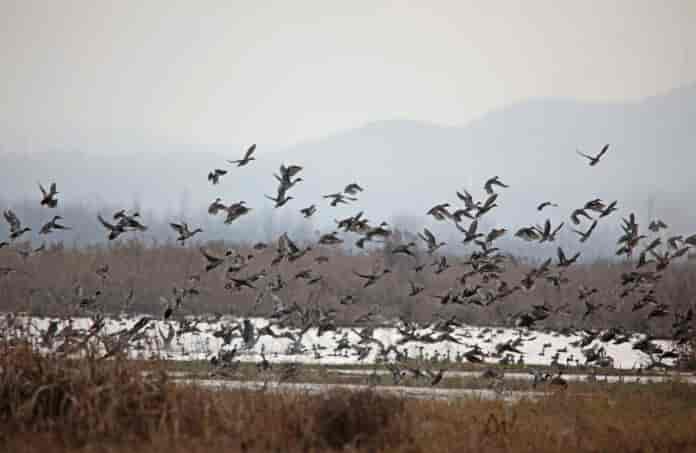 Once known as Maharaja Protected Wetland is losing its sheen as illegal encroachment, unabated pollution and lack of conservation measures have affected the ecosystem of the wetland at Haritar Hygam in Sopore.

The Hygam-Wetland, a natural aquifer, spread over 7.25 kilometers is one of the known wetlands of Kashmir. The wetland is embedded with springs. It has 1400 hectares of land with the area dominated by extensive reed beds and home to many migratory birds including White Heeled Duck, Shoveller, Red-Crested Pochard, White-Eyed Pochard, Pintail, Mallard, Gadwall, Coot and Graylag.

Aijaz Rasool, wetland technical expert and a senior executive member of Environmental Policy Group (EPG) said that due to largescale illegal encroachments, unabated pollution, and insensitivity of authorities to keep a check on human interference in the wetland, the area has reduced to a big pond, forcing migratory birds to find an alternative habitat as their winter home.

“The wetland is ill-maintained. Authorities must restore and conserve the wetland for future generations as there is a water siltation of 10 ft which deteriorates its condition,” he said.

“Scores of structures have come up over the past several years while hundreds of kanals of land were being used by encroachers illegally for cultivating paddy,” he said.

Dar, who is also a member of EPG said that the authorities earlier had identified the encroached land of at least 2300 Kanals that have not been retrieved yet. In addition to this, approximately 1200 kanals of land have been converted for crop cultivation.

Mohammad Shafi Bacha, a retired senior official of the Wildlife department said that he used to count the migratory birds in lakhs in the area. “But we hardly witness any now because the water level capacity of this wetland has been minimized to 1 sq km from 7.2 sq kms due to siltation,” he said.

“In the year 2000, we had marked the wetland and decided to remove the trees which were planted by the various agencies including social forestry, panchayats and even the wildlife department as well. It has been 20 years since then and nothing has been done till now,” Bacha added.

Similarly, locals too demanded attention of the authorities to save the wetland from further deterioration.

Wildlife warden north Kashmir could not be contacted despite repeated phone calls. (KNO)