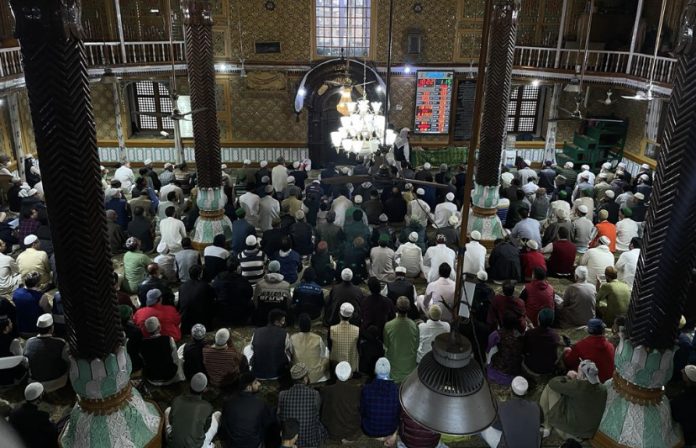 With a remarkable recession in Covid-19 cases for past several weeks now, people from Muslim faith in Kashmir witnessed a restriction-free Eid-ul-Fitr after a gap of almost two years.

Men, women, and children dressed in their best thronged mosques, shrines and Eidgahs across the Valley to participate in the special prayers – symbolic to mark culmination of the fasting month of Ramadan.

The faithful started to assemble at specific prayer grounds (Eid-Gahs) right from the break of dawn. With palpable joy on their faces, people were seen exchanging greetings and hugs in orthodox style albeit after a gap of almost two years due to Covid pandemic (guidelines).

Large gatherings were reported from all the district headquarters, towns and townships across Kashmir valley, with the biggest (gathering) reported from Dargah Hazratbal. Gusty winds and rains at isolated places in Shopian, Baramulla and Kupwara, however forced the people to offer the special prayers inside mosques.

Notably, no Eid prayers were held at historic Jamia Masjid, after authorities declined the extension of prayer timing sought by the Anjuman Auqaf Jamia Masjid – the mosque’s managing committee. Columns of police and CRPF were seen manning the entrance of the mosque located at Nowhatta. The authorities had earlier also barred people from praying at the grand mosque on the eve of Juma-tul-Vida and Shab-e-Qadr, on apprehension of law and order situation. (GNS)