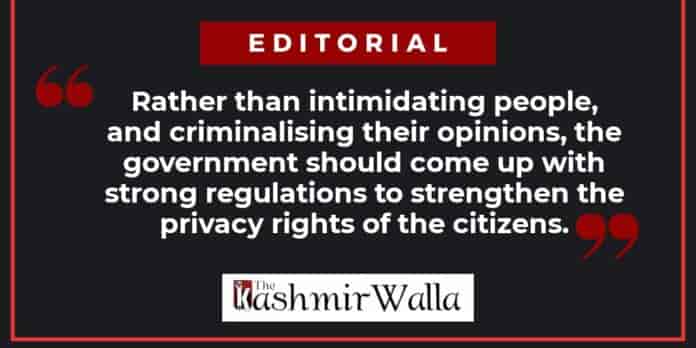 For every citizen in the world, privacy is an important issue that no one wants to be compromised. In Kashmir, people’s privacy is daily compromised when they walk past hundreds of barricades and are asked to identify themselves in the name of security. With the digital world taking over our daily life, from shopping to conversations, everything we do goes on to the internet through different web pages and applications. Our cellphones are connected to the rest of the world via the internet, making our engagement with each other vulnerable.

In the past few weeks, several social media users were summoned by police and some detained, ordered to not make any anti-government posts. This has troubled the ones who were summoned and even the rest who got to know about it. But such attempts have only made people realise the vulnerability of the use of internet spaces for political dialogue and engagement. It has also added extra value to privacy, which seems compromised, thus people choosing to shift to encrypted ways of communication.

The government, however, should stop intimidation of people for using social media or having a political conversation on the internet. This transformative technology has reimagined the world as we know it. And the curbs on these mediums of communication only terrorises a society that aims to make its spaces vibrant and democratic. People should feel safer while using any medium to communicate and not be forced to choose encrypted ways, which has now become a worldwide phenomenon. The use of encryption certainly has become a common norm across the world that protects an individual’s privacy from eavesdropping by any state or non-state actor.

Rather than intimidating people, and criminalising their opinions, the government should come up with strong regulations to strengthen the privacy rights of the citizens and limit the power of the government forces, and of the state, over society’s opinions. That is the basic requirement for a democratic society.

The editorial originally appeared in our 21-28 September 2020 print edition.

Previous article“Police officials abused me, slapped me, tampered my phone”: Journalist who was summoned by cyber police
Next articleThis is pure savagery, aimed at humiliation: Sajad Lone on Kashmir journalist’s ordeal