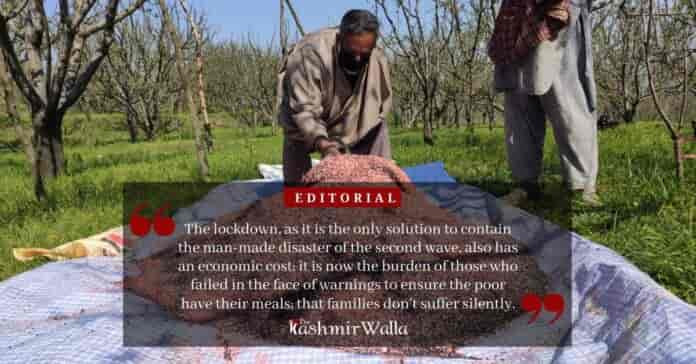 Despite many years of conflict in Kashmir, the people had learnt to sustain the economy. Even as the economy wasn’t doing great, it wasn’t also doing bad. It was surviving and most people were able to manage proper meals and they had jobs, even if rudimentary. The undoing of Kashmir’s economy has now been a persistent affair. Kashmir is now facing it’s third lockdown in three years. The first began in August 2019; the second in March 2020; and the third began last month. Except for the second, the other two were disasters made by the administration. The lockdown imposed last month could have been completely avoided if the administration had not been blinded by its pursuit to showcase a flawed idea of normalcy and opened floodgates of tourists – many coming from states like Maharashtra even as these places were at heart of the second wave of pandemic. A stitch in time, by shutting tourist arrivals and also doing robust scanning of domiciles arriving via road and air, could definitely have saved the situation – but that needed foresight. The lockdown, as it is the only solution to contain the man-made disaster of the second wave, also has an economic cost; it is now the burden of those who failed in the face of warnings to ensure the poor have their meals; that families don’t suffer silently. It is also the administration’s burden to ease taxes, waive loans and provide a stimulus package to Kashmir’s economy.