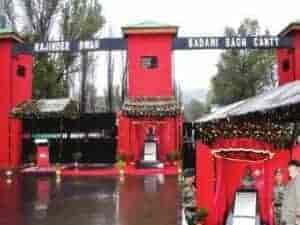 The Indian army on Sunday asked people to avoid the march towards 15 corps headquarters situated at Badami Bagh Cantonment in Srinagar over call  given by the Joint Resistance Leadership (JRL), Greater Kashmir reported.

In a statement issued , an army spokesperson said Indian Army is always with the people of Kashmir and would foil all such “evil attempts of militant-Separatist-Pakistan nexus to pit the civilian population against the Security Forces.”

Call for three days shutdown and march towards Badamibagh army camp on Monday was given by Joint Resistance Leadership (JRL) on Saturday, after seven civilians were killed post gunfight in Sirnoo village of Pulwama

The army spokesperson said, “The public is once again advised not to pay heed to this misleading call by JRL.”

He said the Indian army along with all the security agencies and the civil administration is “fighting militancy and Proxy War, sponsored by Pakistan and its proxies in Kashmir.”

He also said “the objective of the Security Forces (SFs) is to bring peace and normalcy in the Valley with the support of Awaam.”

On civilian killings, the army spokesperson said the security forces make every attempt to avoid any loss of civilian lives in “cross-fire and minimise collateral damage to property.”

He further said that loss of any civilian life is always painful for the forces. However, the vested interests are continuously at work to instigate and mobilise gullible youths to encounter sites.