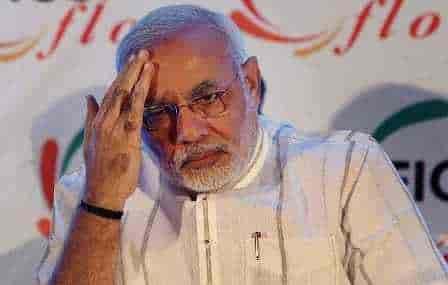 Narendra Modi and his supporters have been challenging to fight this sixteenth Lok Sabha election on the issue of development and governance. It’s pathetic to see how neither media nor intelligentsia or political commentators of this country has not been cornering Modi over deteriorating condition of Muslims in Gujarat in development related field such as education, employment, health, etc. The conservatism of the current Gujarat government is visible most not only in case of their discriminatory policies against the Muslims on the issues related to religion or governance but also on economic issues.

Our concern here is not to find what the condition of Muslims of Gujarat at current time is but instead to find what really had happened to them in last ten years. Thus we need a comparative study of Muslims in Gujarat between the beginning and end of the last decade (2000s).

A comparative analysis of NSSO surveys for the year 1999-2000 and 2009-10 revealed that Muslims in Gujarat had experienced very little decline in absolute poverty. As per the Tendulkar definition of poverty line there were only 1.8 percentage points decline during the decade of Modi’s rule. Gujarati Muslim is marginally ahead of most of the Indian states and national average in terms of poverty reduction, but in past (during Pre-Modi Gujarat) they were much ahead of other communities.[1]In terms of MPCE Muslims’s position is worse than even SC and ST in Gujarat (also Bihar Bengal, Rajasthan, MP, WB). So is the situation in case of urban poverty among Muslims. It is not that the condition of all the minorities in Gujarat is in bad shape. Ironically poverty among other minorities (Christians and Parsi) of Gujarat is 0%.[2]

The same Sachar Committee report about which the supporters of Modi have often been seen quoting from in order to propagate the well being of Muslims in Gujarat, states that Gujarat is one among the states where the work participation rate/ratio of Muslims is lowest. In most of the state Muslims’ participation in manufacturing, trade and self-employment is higher than of other religious groups but it is not the case with Gujarat.[3] The ratio of self-employment in Gujarat is lesser than national average for both Hindu and Muslims but at least for the Muslims same was not the case in 1999-00.[4] In Gujarat, Self employment among Muslims in 1999-00 was much higher than among Hindus but by the end of decade the situation became totally opposite.[5]

Without referring to age old Malthusian Trap of population increase, Gujarat’s CM blame fertility trends among Muslims for their backwardness. If that is so, how Gujarati Muslims were doing well before the coming of Modi into power? The fertility rate among Muslims is highest not in Gujarat but in Rajasthan, UP and Bihar. The differences between fertility rate of Muslims and Hindu in Kerala has been much higher than in Gujarat but their condition is better in other parameter of development. The popularity of contraceptives among Muslims in Gujarat is only 1 % below than of Hindus.[8] Muslim’s Participation in Sterilisation and IUD is slightly more than their ratio to population.[9] At least in Gujarat, Modi cannot blame the Madarsa education for the bad performance of Muslims in field of education because the popularity of Madrasa education is least among Muslims of Gujarat.[10]

The real causes for the deteriorating condition of Muslims in Gujarat are the consistent policies of Government of Gujarat. Muslims constitute about 9.7 % of the poor population in Gujarat but share of Muslims in most Government’s welfare schemes (for poor’s) is below their ratio to total population. Their share is satisfactory only in SJSRY and NSAP schemes.[11] Under Krishi Bima Yojana Muslims got only 3.5% of total allocation. Only 1.4% of total allocated power tiller; and 4.1% of total allocated tractor were in the Muslims. Not a single loan from co-operative department or from Rural Development Department has been disbursed to Muslims in Gujarat.[12].

The contribution of Gujarati Muslims in forming Thrift, Credit Societies; and micro enterprises is more than double of their ratio to population but their participation in training given (5.5%) for unemployed is less than their ratio to their population. Only 4.5% of total lands allocated for the construction of houses, meant for the weaker section of society, were given to the weaker section among Muslim. In contrast to that they got 13.9% of benefits in national family benefit scheme run by central government.[13] Muslim has 12.4% of total bank accounts in Gujarat but the loan amount disbursed to them is only 2.6%.[14] Individual deposit per account in scheduled commercial banks by Muslims is almost 20% higher than of Hindus. Despite that disbursement of loan to Muslims is less than loan dispersed to Hindu. Under SIDBI scheme the sanction of amount to Muslims is only 0.44 crore out of total sanctioned amount of 3133.77 crore during 2000-01 and 2005-06. Similarly the Refinance by NABARD to Muslims in Gujarat is only 1.7% of the total amount during 2004-05 and 2005-06[15].

Based on the figures of Sachar Committee Report, Modi is claiming that the situation of Muslims in Gujarat is much better than West Bengal. Modi is right in his facts and figures. But it should also be noted that United Nations has observed that in terms of the poverty head count ratio for Muslims, the rank of Gujarat is fourth in India.When we compare the conditions of Muslims or any other community in two or more states we should first look into the historicity of that community in particular state. If we can refer to Medieval History, Gujarati Muslims till recent period were one of the most vibrant business communities of the world. Remember the Bohras and Menons? If we compare those with that of landless Muslims of medieval Bengal province who were converted to Islam because of their poverty,[16] it will be obvious to believe that the situation of Muslim in contemporary West Bengal cannot be expected to be better than ST/SC Hindus because there is hardly much difference in terms of practice of casteism among Hindu and Muslim.

Sanjeev Kumar is a writer and theatre activist. He is one of the founding members of Jagriti Natya Manch which consist students from various universities of Delhi.