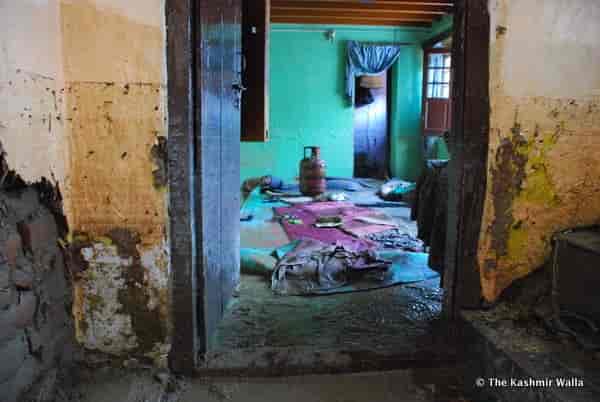 The devastating floods that hit most parts of Kashmir region left a trail of damages, loss, and memories that one may never forget. The Kashmir Walla team has visited all the flood affected areas for the last one month and documented the stories told by the survivors. Below here we bring you three such stories from three different areas of Kashmir.

When water from Vishu stream broke the embankment and entered Arigutan village, two kilometres from Kulgam town on the evening of September 5, Mohammed Yosuf Wani, 50, a mason, was in the village. He had sent his family to safe area earlier that day, anticipating floods. But, he was unwilling to leave. The village meant everything to him. Most of the newly constructed houses in the village that lie in shambles now had been built by Yosuf. He had just finished renovating the village mosque only a few days before floods. Yosuf had seen his childhood and youth give way to old-age in this village.

When the flooding started, Yosuf and a few other men had taken refuge on the roof of a shop located alongside the road leading to the village. Within a few moments he saw the road turning into a gushing stream of water that tore-apart everything coming in its way. His two storey house was washed away in front of him. He was marooned in the floods for nine days before being rescued.

In his own words, he tells The Kashmir Walla:

For a long time, we (villagers) had been asking the government to repair this bund. But none ever paid heed to our postulations. If this bund had been repaired on time, this devastation could have been averted.

I have lived my life but it is my children’s future that I’m worried about. Our house is completely destroyed. They have nowhere to live now. Our small orchard and paddy field has turned into ruins, filled with sand and stones the flood brought along.

They come here now, these MLA’s and politicians saying ‘Hum se jo hoga hum karenge’ (we’ll do all we can). I want to ask them what will they do now? They didn’t do it when we cried and begged them to do it. Now, there is nothing left for us here. Our lives have been destroyed.

For entire last year we made rounds to the local MLA’s office in Tulsi Bagh, Srinagar, pleading him to repair the Bund. We told him and his staff every time how crucial the bund is for the village and its people. But they kept turning us away. It reached to a point when they started calling us Kutt’ie Bund.

These politicians usually come here before elections, asking for votes and promising everything in return. They then never show up after that, until the next elections. Still I voted for them every time. We have never boycotted elections. We put our hopes in these politicians. But what has it got us?

I have one son, who is a driver and three unmarried daughters. Life was hard already and floods have made it even worse. It hurts me to say this, but we want the government to re-settle this entire village somewhere else.

Eleven-year old, Raja Mohammad, is living on his neighbor’s porch with his family in Rachmollah village, a few miles from Sumbal – around 20 miles away from Srinagar. His two storey house was badly damaged during the floods. While his family is cleaning the muck left behind from their house, he spends his day grazing a small flock of his father’s sheep. And like his, there are many other families in the village, who no longer have a home. A number of the structures in the village have collapsed or badly damaged. But that is not what bothers him the most.

He has not seen his friend, Salim, who lives next to his house since the flooding on 6 September. Last he heard of him was a week after. As water had receded, Salim’s sister, along with her parents had returned to the village hoping to salvage some belongings from the debris of single storey-house that lays flat on the ground. But Salim had stayed back with his relatives in Ganderbal.

In his own words, he tells The Kashmir Walla:

It was around 11 in the night. I was in my room upstairs getting ready to sleep. My sisters, mummy and papa were still up. When I closed my eyes papa came up. Handed me a bag and asked to go outside. I ran towards the main gate. Mummy was there, she took the bag from me and we went to the road. My sisters were there. The whole village was there. Salim was there too, with his parents.

Everyone was praying loudly and as water rose, some started crying and wailing. I went to Salim. We talked about something but I don’t remember what it was. My mother then told us to get on a tractor that had arrived. There were lots of people on the tractor. It was very dark, I couldn’t see. But as we drove I could hear the splashes tractor was making in the water.

We drove for a long time and when we finally got down. I saw my family there. Salim was there with his family but after that I didn’t see him. We returned to the village after ten days. I thought he too may have returned. I went to the school but nobody was there. Its main wall has collapsed. So, I don’t when Salim will return.

Before the rampaging water from swollen Jhelum River submerged much of Srinagar city, on 7 September, home to 12 million people, Hameeda Begum, 73, had a roof over her head, a place she had lived for 50 years. But when I met her a few weeks after the floods, she was living in a plastic tent – provided by a voluntary relief group – on a divider of an over-bridge only a few hundred meters away from her inundated single storey house in Maharaj Pur.

Besides her family of six – an aged husband and four daughters: half-widowed, Nasreen, and three teenage college going girls – the tent was shared by two other families, who had escaped here to avoid the deluge.

In her own words, she tells The Kashmir Walla:

It was around three in the evening. In the neighborhood murmurs had been going around since morning that the flood will hit the area, but we didn’t really think it was possible. My youngest daughter, Shahina, had just come back from college, while my two other daughters were already in the house.

I went in the kitchen to get some food for her. But she refused to eat. She said Amma sehlab chu pakkan (flood is coming). I told her not to be scared and finish her food. But she kept repeating that.

My husband, Ismail, was outside in the vegetable garden. He had just come back from his shop. I went out to give him tea and that’s when I heard a loud scream. I thought it was one of my daughters so I rushed back inside. I asked Shahina. She heard it too. Just as we were going to the other room to look if everyone was alright in the house, my husband came running in. He started shouting at us to get out and before I could ask him anything, I felt the cold water underneath my feet. It sent a chill through my spine and in desperation I too started shouting.

I grabbed onto Shahina, while my husband brought the two other girls from inside the house. We started approaching the main gate together in waist-deep water. When we approached the street, there were women crying and wailing, shouting for help from the windows and roof-tops. Young men were hurriedly helping women and children to the main road which was not hit by water yet.

In the barn just next to the gate our cattle were still tied inside. I asked my daughter to go along with the men, while I and my husband dared to go back inside to release the cattle. By then the water was already neck-deep. It was cold, with strong currents. We steered the cattle through water as we moved towards the main road. My husband held my hand tight; it was probably the first time I had seen him scared. We all were sacred.

There was no time to save anything else. Everything we had was in the house; clothes, utensils, books, and some jewelry I had accumulated over the years for my daughters, it was all there.

I have seen hardships throughout my life. When Nasreen’s husband disappeared in 1997, we spent years looking for him. From military camp to military camp I accompanied her everywhere to find out what happened to her husband. We spent all we had, but no one ever said anything conclusive. They kept directing us back and forth. And now this flood has brought us to the road. My arthritis doesn’t allow me to work much anymore. Our vegetable garden has been destroyed; there is nothing for Ismail to sell. It is only Allah knows how we’ll survive.