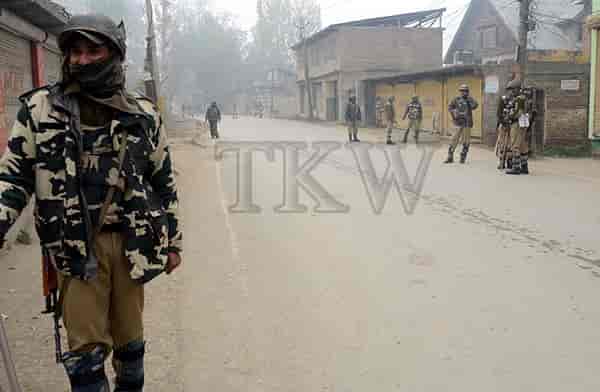 Restrictions have been imposed in most  towns in the Kashmir valley on Sunday as the valley is witnessing shutdown against the killing of seven civilians and three militants in Sirnoo area of South Kashmir’s Pulwama District.

In Pulwama township, government forces have imposed a strict curfew as a large number of troopers are standing guard around the main town to thwart  protests.

Meanwhile all the entry and exit points to Pulwama township have been locked down.

As per reports people in droves are still visiting the families of slain youth in Pulwama District.

Meanwhile thousands of people have gathered at Sirnoo to offer the 6th funeral prayer of Zahoor Ahmed Thokar, the slain Hizb commander for the second consecutive day.

South Kashmir’s  Tral area  is witnessing deserted roads as the entire area is observing a shutdown.

Kulgam township has been placed under strict restrictions even as movement of vehicles is being heavily checked.

Educational Institutes, Railways and Oil stations are closed in the entire district.

In Anantnag, the vehicles of government forces are on all the main points of the township.