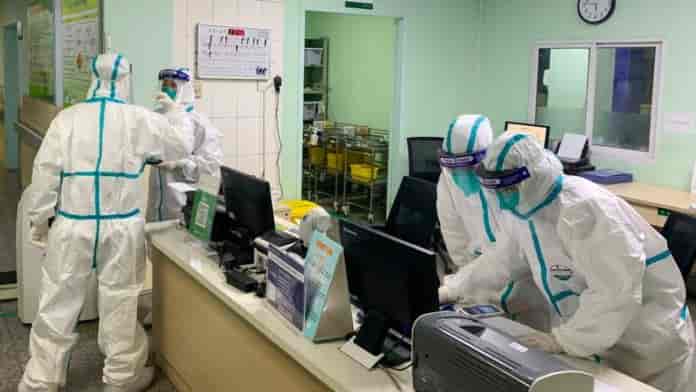 China has suspended public transport in 10 cities, shut temples and fastened constuction of new hospital to contain the virus which has killed 25 people and infected more than 800.

The World Health Organisation (WHO) on Thursday declared the new coronavirus an emergency for China but stopped short of declaring the epidemic of international concern.

Health authorities fear the infection rate could accelerate over the Lunar New Year, when hundreds of millions of Chinese travel at home and abroad during week-long holidays, which began on Friday.

As of Thursday, there were 830 confirmed cases and 25 people had died, reported the National Health Commission.

Most cases are in the central Chinese city of Wuhan, where the virus is believed to have originated in a market which traded in illegal wildlife.

Preliminary research suggested that in the most recent stage of its evolution, the Wuhan virus was passed on to humans from snakes.

Wuhan, a city of 11 million people and a major transport hub, is in a virtual lockdown.

Rail stations were shut, although trains were allowed to pass through the city, flights were suspended and there were checkpoints on main roads in and out of the city.

Neighbouring Huanggang, a city of about 7 million people, has announced similar measures.

Wuhan was building a new 1,000-bed hospital to treat those infected, the official Changjiang Daily reported on Friday.

Building machinery, including 35 diggers and 10 bulldozers, arrived at the site on Thursday night, with the aim to get the new facility ready by Monday.

Non-fatal cases have also been detected in Thailand, Vietnam, Singapore, Japan, South Korea, Taiwan and the United States, prompting several airlines to suspend flights to and from Wuhan.

The previously unknown virus, which has no cure and can spread through respiratory transmission, has created alarm because there are a number of unknowns. It is too early to know just how dangerous it is and how easily it spreads.

A total of 10 cities in China’s central Hubei province have suspended some public transportation over the coronavirus outbreak, the Hubei Daily reported on Friday.

In Zhijiang city, all public venues have been shut down except hospitals, supermarkets, farmers’ market, gas stations and drug stores, said Hubei Daily.

Indoor entertainment venues in Enshi city have also been shut down, it said.

Some famous temples in China have closed due to virus. Beijing’s Lama Temple, where people traditionally go to make offerings for the new year, will close from Friday.

Haikou, capital of the southern resort island province of Hainan, is closing cultural and tourist facilities such as libraries and museums.

In Wuhan residents thronged hospitals for medical checks and rushed to buy supplies, clearing out supermarket shelves and queuing for petrol.

Hong Kong, which has two confirmed cases, is turning two holiday camps into quarantine stations as a precaution. Taiwan has banned anyone from Wuhan from entering. (with inputs from Reuters)