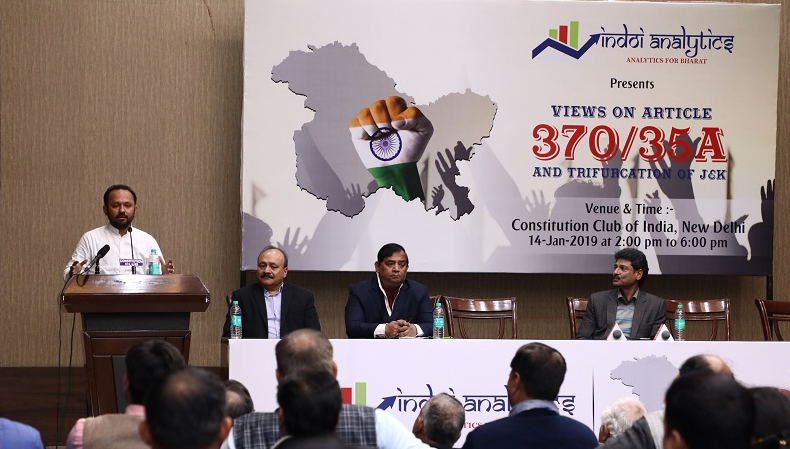 During a recent meeting on the issue of Jammu and Kashmir, several speakers called for creating fear among Kashmiris, especially making Kashmiri youth studying or working in other parts of country unsafe to live, so that their families in the Valley can realize.

“Create fear among Kashmiri Muslims,” said Pushpendra Kulshrestha, a political commentator, during an Indoi-Analytics Conclave titled “Views on Article 370/35A and Trifurcation of J&K” on 14 January 2019 in New Delhi. “Unless the Kashmiri Muslims living in different parts of India won’t be fearful, no one will call you back to Jammu and Kashmir. [Also] unless the parents of these people do not realize that their sons are not safe outside, one who is working in multinational companies or studying outside, you are making them feel safe and see what they are doing.”

Stressing upon the ‘provided safety measures’ to Kashmiri students, he added that the government has appointed nodal officers in every state to ensure that a Kashmiri employee is working there, “their complaints are to be addressed within no time, and all of this is done as a response to what they did to 3.5 lakh Kashmiri Pandits.”

“Thoughts do not change even after getting high posts; when they (Muslims) speak, there is no difference between what (Zakir) Musa, (Abu) Dhujana, Aamir Khan, or be it Naseer-ud-din Shah, and Hamid Ansari says,” said Mr. Kulshestra.

Adding in the clutter of communally inciting words of Mr. Kulsheshtra, Sushil Pandit, owner of HIVE communication Pvt. Ltd., and a Kashmiri Pandit activist, quoted the first speech of former Chief Minister of the state, Sheikh Mohammad Abdullah, in the state assembly, and said, “Kashmir is an independent Republic within the Republic of India,” and added that it (Kashmir republic) was not something that Mr. Abdullah wanted for Kashmir, but was given by India to him.

Notably, in May last year, he was booked by the Jammu and Kashmir police for ‘spreading fake news’ on Twitter during the controversial ‘Ramzan Ceasefire’.

Sharing the stage with the speakers, Javed Shah, a political analyst, said that in the 1990s, people rushed towards forces to which they reacted ‘by opening fire at them’. “Being new in the Valley, they (forces) hardly had any idea. People say that Jagmohan was sent to Kashmir to kill but I will say that he was aimed at developing Kashmir after Farooq Abdullah’s government collapsed in the state,” and held the National Conference’s (NC) ‘unwillingness’ responsible for the ‘situations in Kashmir’.

Targeting the apex court of India, Mr. Kulshrestha added that the Supreme Court (SC) is not listening to the case of Kashmiri Pandits, citing the oldness of the issue, and it (SC) along with the Central government has not been able to take any decisions on the Article 35A and are only adjourning the case. Mentioning the national television debates regarding  Kashmiri Molvis, he said, “they say that we want Shariah in Kashmir, but we do not do anything.”

Mr. Pandit also addressed that the state has even challenged the idea to uphold the ‘secular integrity’ of India. He claimed that the then state administration ‘gave in writing’ that J-K is not a secular state, and “you accepted it which is a humiliation.” Labeling article 35-A as a black patch on the Indian constitution, he added that “it has made a Pakistan on the soil of India.”

As per Mr. Shah, article 35-A and 370 are the provisions that have proved to be counter-productive in J-K, and added that the constitution has been amended more than hundred times, so there is a need to introspect ‘why it has been misused in Kashmir?”

Labeling the Kashmir issue as ‘cancer disease’, Mr. Kulshestra said that the cure to this ‘cancer’ must take place, “be it the army or any something else, but why are we waiting to treat this. Either Kashmir will remain, or it will go, we lost a lot anyway, what if we lose Kashmir.”

Attacking Nehru again, Mr. Pandit continued to say that he had announced in Lal Chowk (Srinagar), that the plebiscite will be held, “without taking permission from the parliament; it (Kashmir) was not his property to decide what he wants.”

Targeting the communal lines of the valley, Mr. Kulshestra said mentioned that in past 70-years, there has been no Shia Chief Minister in Jammu and Kashmir. Citing the example of Ghulam Nabi Azad, a Congress leader, he said that “they wanted shariah in Kashmir in 2007, and talks about secularism in Delhi.”

Lashing out at the former chief minister of state, Mehbooba Mufti, he said “it was (Atal Bihari) Vajpayee’s political compulsion to iterate Kashmiriyat, Jamhooriyat (democracy), and Insaniyat (humanity); I am telling to break it. The Kashmiriyat has been turned into Jihadiyat.” Expressing the grievances regarding the Pandit migration, Mr. Kulshestra added that the “Wahabiyat and Insaniyat have been transformed into Haiwaniyat (devils). The government is spending a lot of money on them, from 50,000 crores to 80,000 crores, and they are enjoying that. I am saying that create fear.”

Among other who spoke at the conclave were G. D. Bakshi, retired major general of army and Ankur Sharma, who is head of Ikjutt-Jammu, an organisation that has been organizing campaigns in Jammu.