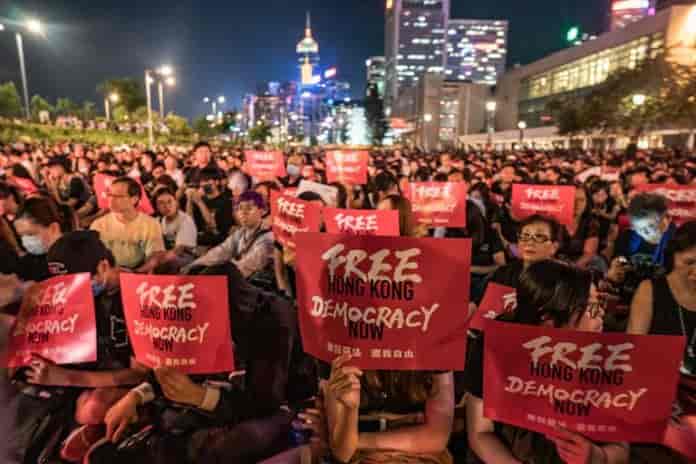 China on Monday said it is sanctioning leaders of US government-affiliated bodies that promote democracy around the world in response to what it calls practices that blatantly meddle in Hong Kong affairs.

Foreign Ministry spokesperson Hua Chunying said the measures would cover the senior director for Asia at the National Endowment Democracy, John Knaus, the regional director for the Asia-Pacific at the National Democratic Institute, Manpreet Singh Anand, and two of the institute’s officials responsible for Hong Kong.

Hua gave no details and the institute said in a news release that it had no further information but that it remains steadfastly committed to these core principles and to continuing our work in support of democracy worldwide.

China has long accused such groups of encouraging dissidents who built grassroots movements to push for greater direct democracy in Hong Kong.

Those burst out into street protests in 2014 and again last year, prompting a harsh crackdown from authorities.

The US has imposed sanctions on Chinese and Hong Kong officials over the passage of a National Security Law that imposed strict penalties for critics of the Beijing-backed government that has ruled the former British colony since it returned to Chinese rule in 1997.

The sanctions ban the officials, including the head of Hong Kong’s local government, Carrie Lam, from traveling to the US and freezes all dealings with American financial institutions.

The US should immediately cease interfering in Hong Kong affairs and China’s internal affairs and avoid going further down the wrong path,” Hua said at a daily briefing.

Hong Kong is just one area where tensions between Washington and Beijing have risen over recent years.

The Trump administration has cut off Chinese tech giant Huawei’s access to most US components and technology on security grounds, part of a feud over trade and technology that has led the White House to press the Chinese owner of video service TikTok to sell its US operation, which American officials say is a security risk.

US accusations of Chinese human rights abuses, particularly against Muslim minority groups in the northwestern region of Xinjiang, have resulted in frequent angry exchanges between the sides.

Frictions have also built over Washington’s support for Taiwan, which China claims as a breakaway province to be recovered by force if necessary, along with China’s territorial claims in the South China Sea. (AP)