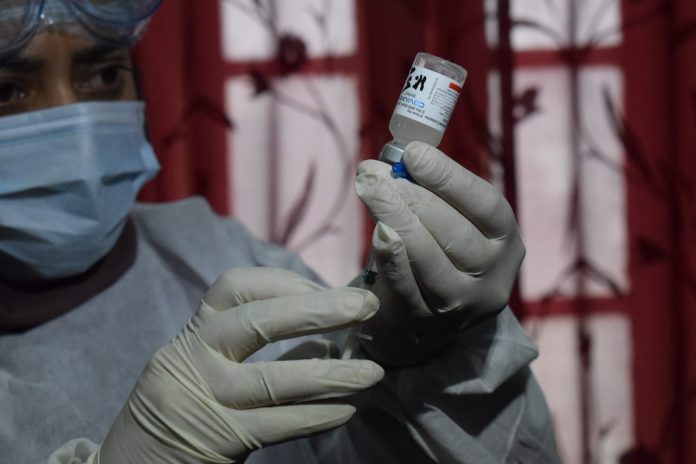 On a chilly Sunday Javed Ahmad Shah was sitting at his office in Srinagar, his phone beeped as he received a message. The message read, “Dear Mohammad Farooq, You have successfully been vaccinated with your 2nd Dose with COVISHIELD [vaccine] on 01-01-2022 at 04:10 PM.”

“What is this? Who is Mohammad Farooq and why did I receive this message,” surprised Shah asked a few friends sitting around.

He was surprised to see the message about the 2nd dose of Covid vaccination and the name displayed on it. “I primarily thought that they may have mistakenly referred to me as Mohammad Farooq,” recalls Shah.

The Ministry of Health and Family Welfare, Govt of India kickstarted Covid vaccination amid the spread of novel coronavirus on 16 January 2021 to help “people develop immunity to the virus that causes COVID-19.”

To check the “discrepancy” Shah checked Cowin website – that tracks Covid updates, vaccination process and issues certificates to vaccinated people – to cross check the credentials of the text he received over his phone.

“I checked the website and found that two people are linked with my mobile number whom I do not know, one among them is Mohammad Farooq,” Shah said.

“Firstly, how can someone whom I do not know be linked with my mobile number. Isn’t this a fraud?” he asked.

The certificate displays that he has been administered both the vaccination doses at Qazigund Public Health Center in Kulgam district – over 75 km away from his home in Srinagar. However, Shah has not taken the 2nd dose of the vaccine yet but for authorities he has.

“I have never been to the district for the past several months and neither have I received the second dose of the vaccination. Why should I travel to Kulgam when the facility is already available here in the city,” Shah said.

Shah has crossed the due date for second dose of vaccination last month and he is now worried if he will be administered the dose as the Covid-19 certificate already shows him as fully vaccinated.

In India nearly 3.50  crore people were infected with the novel virus that claimed the lives of 4.82 lac people.

Government claims that as of 31 December 2021, India has administered over 1.44 billion doses.

The Government of India had set a target to vaccinate all eligible adults by the end of 2021 – and said that the target was “completed successfully” by administering COVID-19 vaccination to 100 crore people.

Mohammad Sajad, a native of Srinagar has been also informed through text message that he has been administered the second dose of the vaccination.

However, Sajad has not received the 2nd dose of the vaccination yet, but for the government he is “fully vaccinated”.

The messages being sent to people about their vaccination status does not go well with them as they term it as a “race to increase numbers of vaccinated people in their records”.

According to the data furnished by the ministry, 90 percent of the eligible population has been administered the first dose of the vaccine and the coverage is at 65 percent for the second dose.

Since the authorities in different states and Union territories of India have restricted entry for people “not fully vaccinated”, the “fake certificates” could be used as a privilege to enter into the restricted areas.

India remained in the middle of the controversy as a few countries initially did not recognise the Indian developed vaccines as valid due to which people of India were denied entry.

In the past several days The Kashmir Walla received several complaints regarding the issuance of certificates where they have been told that they were  administered 2nd dose of Covid-19 vaccination even when they have not received it.

Juniad Kathju, a senior journalist, at around 02:00 pm on Saturday- while he was at his office- received a message over his phone similar to Shah and Sajad. In the texts he was addressed as Masooma – a name used by females in the region – and was informed that she [Masooma] has received the second dose of Covid-19 vaccination at Government Boys Higher Secondary Ganderbal, nearly 40 kms away from the home of Kathju in Srinagar.

Nearly two hours later Kathju’s phone again beeped to inform him that Saika [name used by females] has received the second dose of the vaccine at Wussan Ganderbal. The repeated misaddressed messages bursted Kathju in laughter wondering who the women were.

“I do not understand what this is. How is my mobile number used by someone else,” Kathju said and quipped “Thank God, I am not married, otherwise I would have to explain to my wife how my number was being used by some unknown women”.

An official told The Kashmir Walla that it may have been due to “technical error” that wrong messages were sent to people about their vaccination status.

Given the association of mobile numbers with different people she said, “due to lack of electricity at several places numbers are fed manually and due to which errors may have happened. “People should explain their case at the designated vaccination Centers and it will be rectified,” she said.