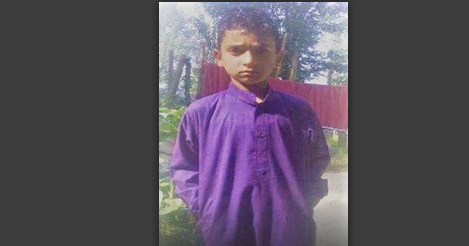 Srinagar: Charred body of minor boy, who had gone missing few days back, was recovered from a nallah in north Kashmir’s Kupwara district. Police has immediately formed a special investigation team to probe into the death of the boy.

On next day, the locals of the area took to streets and blocked the Kupwara-Tanghdar road and staged a massive protest demonstration demanding the whereabouts of the missing boy.

Today, some locals spotted the body in a nallah at Gushi. In the meantime, the relatives and residents of the Gulgam area reached the spot and took the body towards the native village.

Soon after the body reached the Gulgam, the locals assembled there and staged massive protests against the minor’s death.

“Those responsible for the death of minor should be punished strictly,” they said.

SSP Kupwara confirmed that the body of the minor was recovered from Gushi village. He said that SIT headed by ASP Kupwara has been constituted.  “A board of doctors will examine the postmortem and it will be video-graphed,” he said.

DIG north Kashmir Sunil Gupta also assured that those responsible for the killing of boy would be given an exemplary punishment. “People should cooperate with police and those behind the killing will not be spared.”

He appealed to people to maintain calm and hand over the body to the local police for completing the medico-legal formalities including the post-mortem. The officer urged people to cooperate with the investigating agency. (GNS)