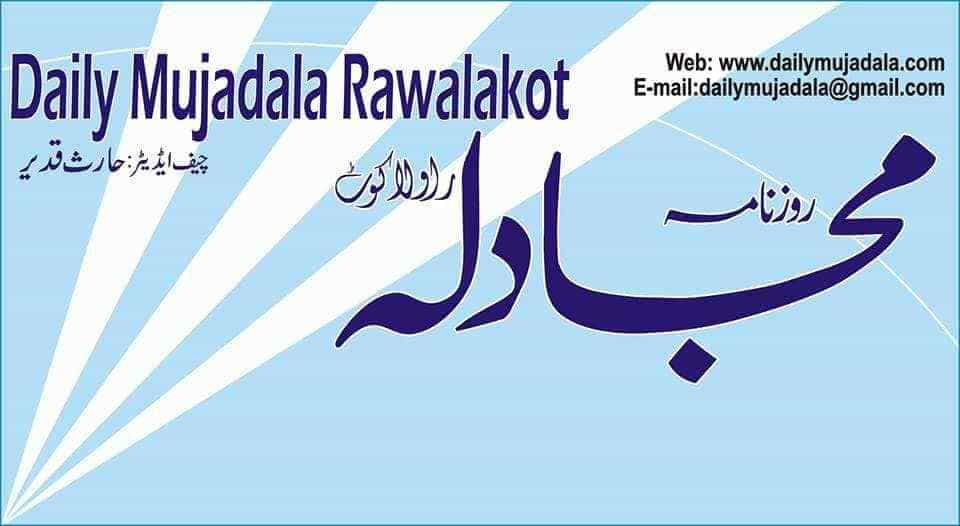 Freedom of expression is always the freedom of those who think differently. Rosa Luxemburg

On August 24, the offices of the Rawalakot-based daily broadsheet, Majadla, were raided by the city administration. The staff was evacuated and the office-building was sealed. More than a month on, the Majadla offices remain closed. While the official pretext is Majadla’s illegal publication, the editor and publisher insist that Majadla has the provisional permission for the publication while waiting on the official declaration. Not merely the Majadla management, activists and intelligentsia in Azad Jammu and Kashmir (AJK) have viewed the action against Majadla as a retributive and punitive state attempt to silence dissent.

What allegedly invoked the official wrath was a report, published a day before the raid on Majadla, citing the results of a survey conducted by a British-based researcher. According to the survey, comprising a sample of 10,000 respondents, over 70 percent of the AJK state subjects wanted independence for the State.

This Majadla incident is neither unique nor isolated action against dissenting voices in AJK. Last year, 16 books were banned by the AJK government. Ironically, among the banned books, there were two of Maqbool Bhat’s titles: The Story of Escape from Srinagar Prison; and Who Am I. Likewise, Maqbool Bhat’s biography, authored by noted Kashmiri intellectual Shams Rehman, titled, Maqbool Butt: The Life and Struggle was among the banned books. Most of the banned works, however, were authored by Saeed Asad and were published under the banner of National Institute of Kashmir Studies.

While Maqbool Bhat (his surname is spelled Bhat as well as Butt) is a household name and he iconises the struggle for a free Kashmir, for many in Pakistan fed on Kashmir-As-Jugular-Vein theory he may not ring a familiar bell.

A co-founder of Mahaz-e-Raishumari, Bhat and his comrades were inspired by national liberation guerrilla-struggles of the 1960s. He viewed an independent Jammu and Kashmir as the ultimate goal of his struggle and the only solution optimal to the Kashmir question. Persecuted in Pakistan and hunted in India, he was finally hanged in New Delhi’s Tehar jail in 1984. Through his martyrdom, he achieved the status of a martyr. In AJK and the Valley, his familiar image decorating the posters and banners will benignly stare at you anywhere you go.

Call it an irony or hypocrisy, a week after the ban on his books and biography, the then AJK prime minister, Abdul Majid, appealed to the UNO and international leaders to press India for the return of Maqbool Bhat’s remains.

Back to Majadla. The suppression of Majadla symbolises a generalised stifling of voices dissenting from Islamabad’s policy to deny the State subjects their right to self-determination. This policy has been implemented through a two-pronged strategy. On the one hand, ‘accession to Pakistan’ has been institutionalised through AJK’s Interim Constitution of 1974 providing legal basis for governance, on the other, Kashmiri parties have been crowded out through franchisees of Pakistani political parties (an obnoxious initiative first taken by Bhutto in the 1970s). A particular target is any voice and project that stands for the ‘third option’. Ironically, MQM and Lashkar-e-Tayyaba can legally operate in AJK, however, the JKLF or JKNAP are theoretically illegal.

Dr. Farooq Suleria is a freelance writer and a Teaching Fellow in the Department of Politics and International Relations,  SOAS University of London.. Email: [email protected] com.