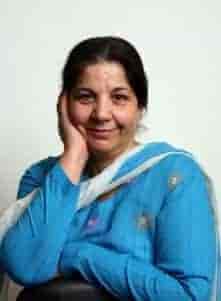 Nayeema Ahmad Mehjoor walked out as the Chairperson of Jammu and Kashmir State Commission for Women (SCW) soon after the break-up of the PDP-BJP alliance on Wednesday.

“I have to resign because we don’t have a government left,” said Nayeema Ahmad Mehjoor. “I am a non-political person and I can’t fit in politics. The system is not well for an intellectual to work, people like me can’t work in a rotten political system,” she added.

Sending her resignation to the governor N.N Vohra and Chief Secretary she asserted that she was waiting for this time and God had provided her with the same.

Talking to Twitter, Mehjoor said that she is a ‘free woman, freedom at last.’

I have resigned from the post of chairperson, jk state commission for women early morning. I am now free woman… freedom at last…..

Earlier, Mehjoor has served in BBC world service as a senior journalist and editor for 15 years before being appointed as a chairperson.

“I worked very hard in J&K and I have bought a revolution from the last 3 years regarding women issues and women awareness programs. It was me that did it efficiently otherwise the staff and infrastructure are below average. We have nothing here and every time you ask for this it takes ages for them to get everything in order,” she said.

“Regarding the funds we got a huge expenditure from the National Commission for women, there was never a problem with funds and we used to apply them effectively,” she said.

“We are not an independent organization, to give justice to the people associated we want to involve other departments. What is the point of having the institution when we have no power over it,” she added.

Talking about the future steps in her career, Mehjoor said that she wants to complete her book which is due last December.