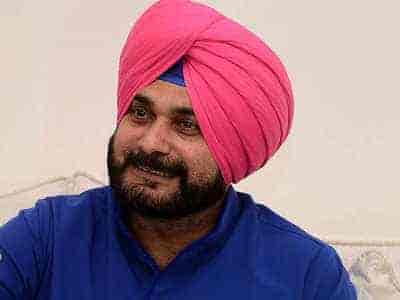 Sidhu has been in the middle of a controversy after  hugging Pakistan’s Army chief Qamar Javed Bajwa during the swearing in ceremony of newly elected Pakistan Prime Minister Imran Khan.

\According to reports, a video of Sanjay Jaat, the president of the Rashtriya Bajrang Dal, Agra unit, is doing rounds on social media, where he has put up a reward of Rs 5 lakh to anyone who beheads Sidhu. In the viral video, the Bajrang Dal leader is showing a cheque of Rs 5 lakh and making an announcement that he will give it to anyone who slashes Sidhu’s head and brings it to him.

In the video, Jaat says, “He is a traitor and his act is unpardonable. Treason charges should be slapped against him. Sidhu seems to have forgotten teachings of Sikh Guru Govind Singh. How can he hug Army Chief of the enemy nation who is responsible for killings of our soldiers?” He also announced that he will ban Sidhu’s entry to Agra and will welcome him with shoes if he ever tries to visit Agra.