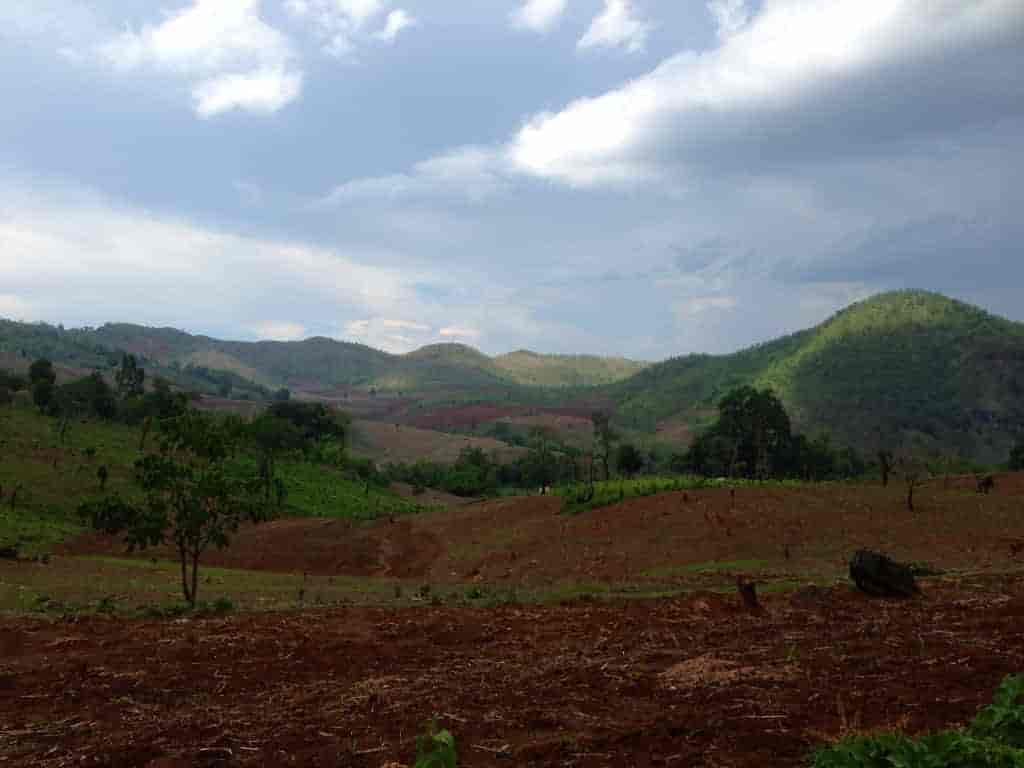 The Island of Borneo, which holds the title of the third largest island in the world and was once covered in thick rainforests was and is being cleared and mined at a rate unparalleled by mankind in human history. Situated in South East Asia, and belonging to three countries, majority of the island is Indonesia’s 17,000- island archipelago. More than half of the annual global tropical timber in the world comes from logging in Borneo, much of this clearing is illegal and the land is then used for palm oil plantations, mining and agricultural land.

The speed and ferocity of logging in this region the world had never seen before, 60-240 cubic meters of wood was and is harvested per hectare and if you compare that to the clearing in the Amazon which stands at 23 cubic meters per hectare, it’s a significant difference.

The bio-diversity and ecosystem of Borneo are distinguished in three categories, as mountain rain forests in the central region, lowland rain forests, and peat swamp forests. This Island is shared between three countries Indonesia, Malaysia and Brunei and is the habitat region for many endangered and rare species of flora and fauna, most famous of which are the orangutans, elephants, proboscis monkey and hoses civet.

Many Indigenous communities have long lived on this island and relied upon the land as a source of food and water for generations. Sadly without prior, free and informed consent their ancestral forested lands were and are continuing to be cleared by heavy logging, mining, and hydro electric dams, and in Sabah and Sarawak which is the 26% of the island owned by Malaysia the logging licenses were issued without any knowledge of the native land owners. The logging has created many problems with the soil fertility and growing small crops and sustaining living has become more problematic as erosion, land slides and nutrient’s have been removed with the logging and wet season downpours.

The communities have contested these issues with very limited success and exposure to their cause.The 2008 Malaysian Sarawak corridor of renewable energy plan created further logging, mining and destruction of habitat and biodiversity which alienated the native land owners rights to their ancestral lands, and the communities do not benefit from any of this activity mostly living with none or limited electricity as the resources are sold offshore. Years of advocacy and demonstrations have shed some light on the issue but change and rights of consent has been elusive.

If you have ever had the opportunity to fly into Malaysia be it peninsular or Borneo Malaysia one of the first things you see are the enormous palm oil plantations, which stretch into the horizon as far as the eye can see. By land you come close to these plantations as every highway and waterway is lined thick with these abdominal plant species. Malaysia has created an enormous industry, and in return demand has increased for palm oil across the world. Various products are infused with palm oil and the western world consumers who wish to ban the use are bombarded with over 60 terms for ‘palm oil’ being unable to make a concise decision about the products they wish to choose without palm oil.

Originally deforestation in this region was minimal as the soil was seen as infertile, the climate hot and humid, and disease was rife due to insects numbers. After Malaysia depleted its peninsular forests it initiated favorable political relations with Indonesian president Suharto and as Suharto wanted the same he distributed land in Indonesian Borneo Kalimantan to army generals.

By 1980’s roads had been created for logging and developers, allowing access to remote regions of Kalimantan where originally only native tribes lived. Almost all mangrove forests were cleared by 1980 and 80% of lowland forests. Over 85% of logging in Indonesia is illegal and transited out through Malaysia.

Indonesia holds the largest portion of the island approximately 73% and since the 70’s the government has mismanaged the resources of the island in various schemes. To begin with in the 70’s and 80’s when there was still some jungle in Indonesian Borneo, the government decided in order to handle overpopulation, food shortages, landless peasants and poor farmer numbers in Java, they would be resettled in a transmigration program to Kalimantan, to farm the logged lands and help assist in the large food shortage facing Indonesia. On paper this appears to be a good idea, but little research was done in order to see how this could be achieved and its environmental impact. Heavy investment was made by the government, and in 1996 the “Mega Rice Project” was implemented, its aim to turn 1 million hectares of peat swamp forest in South Kalimantan into productive rice fields.

Further deforestation occurred and new water canals were created to support the rice paddies. There was no research in sustainability, soil fertility and soil nutrient’s or any information obtained from native land dwellers, once the trees were cleared, the soil was void of some benefits and the remainder was washed away during the wet season. Obviously causing severe damage to the fragile environment the project was a failure and eventually abandoned. Indigenous land owners were not considered or utilized for their knowledge, information and assistance about the land which was invaluable.

The consequence of building water canals, roads, and railways for legal logging is that it allows access to people and companies for illegal logging. Statistics have shown that the region where the “Mega Rice Project” was conducted forest cover dropped 20% to 45.7% very rapidly and all trees of value were removed due to easy access and this figure continues to drop.

Tensions have been high in Malaysia, Indonesia, Brunei, and Singapore as forest fires in the past decade have created the Asian haze smoke and affected millions of people with respiratory problems. This haze is a direct result of forest fires and land clearing due to large scale land conversion in particular for palm oil plantations, logging and mining, destroying and expanding to remaining forests. Agriculture, people and wildlife do not stand a chance, the haze has created a cloud of carbon dioxide, which is released from the peat forest and drifts across these countries affecting the atmosphere and livelihood’s of the native people among others. Satellite images taken by World Wildlife Fund have recorded and shown that the fires are a direct result of commercial developments and not as the government suggest small-scale agriculturist. Singapore and Malaysia claim that Indonesia cannot controls these fires which in the dry season spread over 100’s of kilometers, but Indonesia has long claimed that the fires are actually started by Malaysian firms for land clearing.

The people suffering the most are the native tribes who relied on fishing as a source of food and income have seen reduced numbers of fish and disfigured fish, a direct result of the acidic water and waste from the fires and mining which is dumped in the river systems. Sulphuric acid from the peat and mineral wast from mining is present in the rivers 100’s of kilometers away.

Kutai NP is a prime example of lowland tropical rain forest the area of 198,629 hectares consists of over 900 identified plant species many more yet to be discovered and extraordinary wildlife consisting of Orangutans, Proboscis monkey, hornbills, asian forest tortoise, and black eared squirrel. This rich flora and fauna of Kutai NP has experienced further pressure the past 2 decades, encroachment, illegal logging and hunting are major daily issues. Theses and other illegal activities go unchecked and violations of the law and the park continue.

The history of this park is an example of how the government of Indonesia has since the conception of this park back in 1932 continued to exploit the region for its resources. In 1932 the park was 2million hectares when a Geologist, Ir H Witkamp working for the Batavian Oil company declared the region “Wildreservaat Koetai” “Kutai Game Reserve”. By 1995 under various ruling Sultan’s and the ministry of forestry, the expansion of oil exploration, deforestation, mining plus the increase of inhabitants of Bontang municipality the park was reduced further and further, to eventually be what it is today 198,629 hectares. What makes this park so special is that six types of vegetation, Ironwood, Merantikapur forest (highly sough after wood), mixed Diptercarp forest, Mangroves, Floodplain forests, (freshwater) Swamp forest and Heath forest. Each individual ecosystem supporting life and providing clean air oxygen, water, regulating local and regional climate and preventing the impact of natural disasters like floods and landslides.

Irony is the national park is surrounded by 6 logging, coal, natural gas, and fertilizer companies, and the sea to the east. Waste, industrialization of natural land, from the companies have had an effect on the changing ecosystem.

The conservation area is also home to thousands of plant and animal species including twelve rare endangered mammal species living in average density of 0.66-1.27 kms which is not enough of territory. Male Orangutans are often seen with signs of injuries from battles and falling out of trees. Orangutans build a nest to sleep in each night at a different location within their territory, lack of favorite nesting trees (also a logging favorite) plus limited space is one of the key reasons the species is endangered as a direct result of logging and habitat destruction. Crocodile’s were seen in larger numbers before in Sangatta River, lower fish stock and industrialized waste in the river systems have shown that this species is also under threat. The park is an important water catchment area with 25 rivers supplying people and coal industries whom both depend on the limited area.

What we are seeing here is that there needs to be greater sustainable management of forest resources. For this to be achieved we need to fully comprehend that history has shown us that conservation and protection cannot be solely in the power of the countries with resources. Global pressure from all consumers is the answer, we need to question our purchases for everything, the supply and demand model needs to be examined more closely.

Consumers need to question purchasing – a timber coffee table, where does the wood come from? To cream ‘s what material is inside it, does it have any palm oil? We need to question our product choices and its access to resources. The age of technology and access to information for consumers allows us the ability to research what products we use and how we can assist in the protection of the worlds resources. Its no secret the developing world produces for the developed world who have money and purchasing power. Companies and governments see trends is consumer needs and consumer power, its time collectively to make a change and we are starting to see this happening more as people become more aware and informed of how beneficial our forests are to our existence.