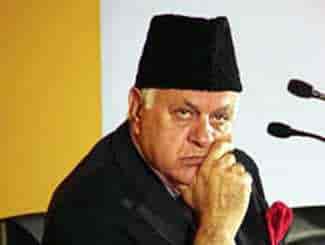 Srinagar: BJP has hit back at Farooq Abdullah on the allegations of communal divide saying that the tirade of National Conference President and three time former Jammu and Kashmir Chief Minister was driven by his “frustration and desperation.”

“His tirade against BJP is driven by the fact that Modi government has ignored the Abdullahs to such an extent that they are engulfed with frustration and desperation,” said the BJP state spokesperson Brig Anil Gupta.

He claimed that Abdullah was issuing “irrational and illogical” statements because Kashmiri youth abhorred his party.

Reacting to Abdullah’s charge that the BJP mastered communal divide within India, Gupta said: “If protecting the interests of the majority is ‘divisive’ according to Farooq then what would he term the NC-Congress vote bank politics which is based on playing with the sentiments of Hindus against Muslims and the sentiments of Muslims against Hindus?”

He alleged that the NC has mastered the art of playing Muslim card in Muslim area of the State and Hindu card in Hindu areas to mislead the voters without any regard for people and the nation.

Hitting back at Abdullah for terming BJP leaders as “Dakku Number 1”, Brig Gupta said he was one of the main accused in Jammu & Kashmir Cricket Association scam where crores have been robbed.

“The demand for revealing the source of huge wealth amassed by him and his son is also growing louder and the Abdullahs need to disclose from where these have been robbed? The people are intelligent enough to know as to who is “Daaku Number 1?” he said. (KNS)