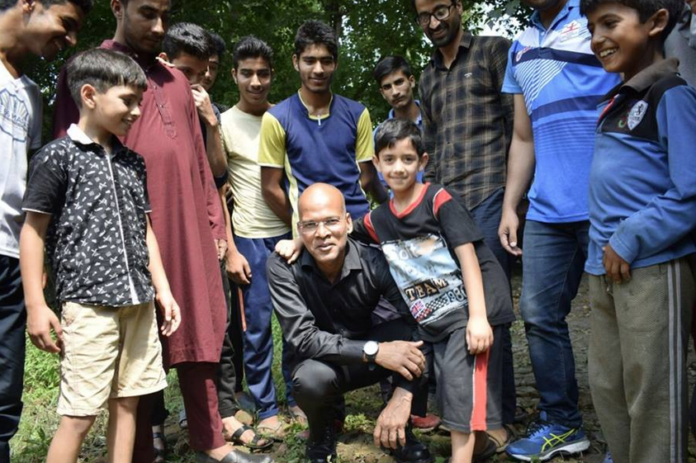 Srinagar: Netizens of Kashmir were left disappointed and angry over transfer rumors of Basant Rath from the post of Inspector General of Police (IGP) Traffic, which were spread on social media on Monday.

The rumor was spread that Rath, who rose to fame for being easily accessible to the people which included reaching out to people through social media websites, was removed as IGP Traffic. It was posted on several social media news pages and personal profiles of people and also in WhatsApp groups.

While some were celebrating his transfer, most of the Kashmiri social media users were expressing anguish and paying tributes for him being an honest officer in the police force.

It is, perhaps, first time that a police officer is receiving such abundant positive response from people of Kashmir. Whether it be clicking selfies or spending time with youth, Rath enjoys overwhelming support from the locals, particularly those from the Kashmir valley.

But Rath also gets into arguments and online clashes with other government officials or even politicians. After Junaid Azim Mattu, a People’s Conference leader, was recently elected as Mayor of the Srinagar city, he clashed with Rath. While Rath posted that the Mayor’s job is not to look into the traffic management, Mattu responded with calling him unwell.

As soon as the news about Rath’s transfer spread, Kashmiri netizens took to social media sites to express their disappointment and shock over the decision. Although Rath clarified to The Kashmir Walla that there was no such transfer order issued, netizens kept wishing him luck and bode him farewell. Some also expressed joy for his removal as they see him as an arrogant officer who is only trying to get fame.

But the support even came from his senior police officials. Former Director General of Police Shesh Paul Vaid, was among many to express his reservations about the decision. Taking to his Twitter handle, Vaid hoped the decision to remove Rath was just a rumor.

Social media agog with rumours of transfer of Basant Rath @KangriCarrier IGP Traffic; I hope it isn’t true. He may follow unorthodox ways, but his honesty and dynamism is appreciable & commendable.

Among many Kashmiris, Independent Lawmaker Engineer Rashid also expressed support to Rath. Rashid wrote that Rath had been “victimized for being honest, secular and dedicated.”

Much like most social media users of Kashmir, journalist Majid Hyderi lashed out at the government for supposedly removing Rath. “By transferring Basanth Rath for arguing with Neta, JK Govt not only belittled institution of IPS but behaved like cabbage,(Sic),” Hyderi posted on his Facebook, referring to Rath’s recent post about Mattu.

While “we will miss you Basant, well done” messages were rife on internet, many of the social media users were angry at the decision.

What ever the man @KangriCarrier has did, sure for the first time Kashmiris are concerned and unhappy with the transfer of a top cop.
Sure he has made the line.#basantrath

#BasantRath is the First Cop in the History of Kashmir who is being Loved by a large majority for his Honesty and Dedication. His Transfer would mean how Corrupt and Evil the System is.

I have never seen even SHOs moving without triple escort and bullet proof vehicles IGP moving without all this that too in a war zone .Hats off Basant Rath you really believe in GOD… We Kashmiris will always love you .@KangriCarrier @spmalik_13 @Junaid_Mattu