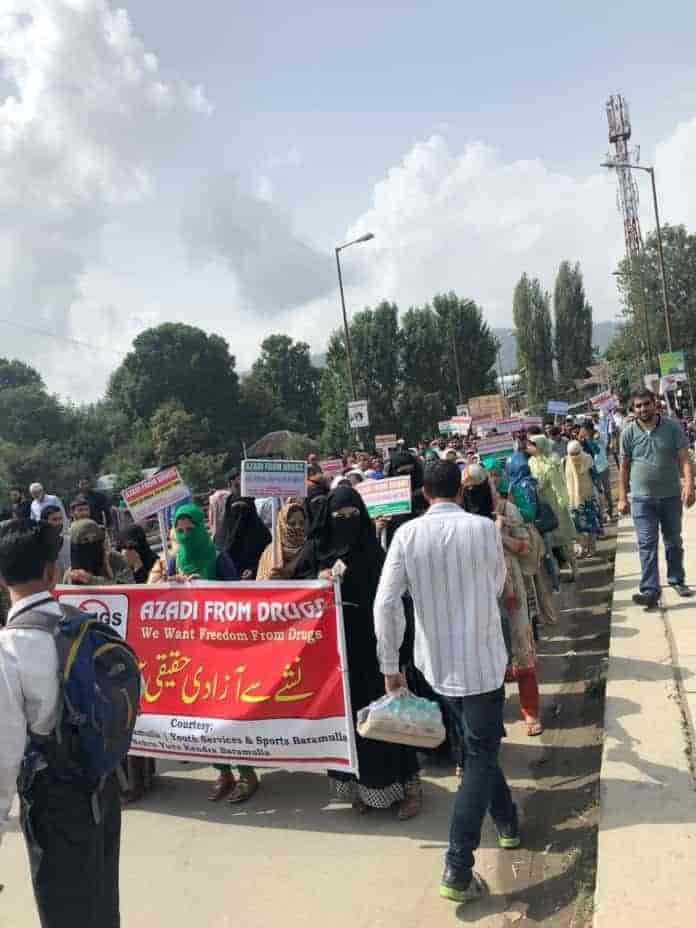 With a theme “Azadi from drugs” , Baramulla police on Tuesday  in collaboration with Nehru Yuva Kendra(NYK), Education Department and Youth Services and Sports department organised an Anti-Drug rally in Baramulla Town.

In  a statement issued here the police spokesman said that the rally  was attended by huge number of students, volunteers and prominent citizens of the town, “ The rally was flagged off by  Deputy Commissioner Baramulla  Nasir Ahmad Naqash from DC office Baramulla,” he said.

Adding that the  rally passed through various roads and streets of new and old town Baramulla and culminated near Karriapa Park, “Later on a seminar on Drug Abuse was held at Dak Bungalow Baramulla,”

The spokesman said that the while addressing the rally, SSP Baramulla Imtiyaz Hussain urged the participants to pledge to work wholeheartedly against the menace of drug addiction.

He stressed the need to spread the message everywhere to save the new generation from getting perished through menace of drug addiction, “Whole nation has been celebrating 72nd Independence Day and it’s time we launch a movement against drugs,” Imtiyaz said.

He further said that people have to be aware that the drugs in the shape of Heroine and Brown sugar smuggled from across the border are being alarmingly used by new generation of Kashmir and it needed immediate attention.

“Though police is putting up lot of efforts to stop the supply of these drugs and many drug traffickers have been booked under Law but public awareness about this new menace is of paramount importance,” Imtiyaz added.

The spokesman said that on the  occasion, general public of Baramulla were requested to utilise the services of Police Drug De-addiction Centre Baramulla to treat their wards in order to get them rid off drug abuse.