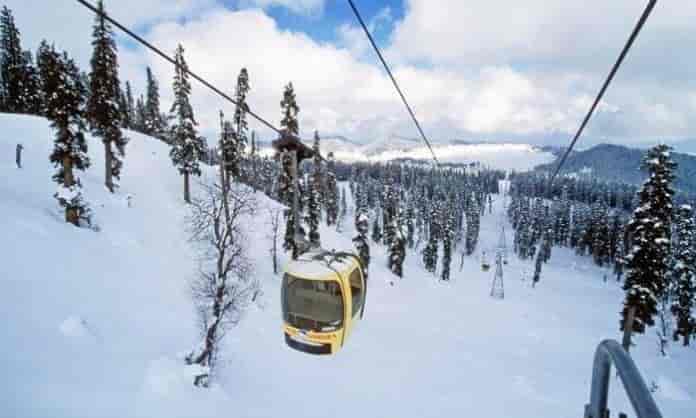 Srinagar: Wherein the governments across the world are advising people to avoid public gatherings amid the threat of a pandemic – of the novel coronavirus, Covid-19 – Kashmir administration is bracing up to host the biggest sporting event since August 2019: Khelo India Winter Games.

The event that is scheduled from 7 to 11 March is to be held in the popular tourist destination, Gulmarg. About 900 players will participate. Tomorrow, the opening ceremony is expected to be attended by senior administrative functionaries and other delegates.

But on 5 March, the government of Jammu and Kashmir placed front-page advertisements asking people in all capital letters, with red background: “AVOID LARGE GATHERINGS… Help us to help you.” Similarly, the event was publicized.

The virus has infected at least 95,000 people around the world and claimed lives of 3,300 people. In India, at least thirty-one cases have been confirmed while hundreds are under screening, including seven in J-K.

The locals and netizens were quick to pick the contrast in administrations’ steps. Many highlighted the issue, writing on social media that the event should be called-off.

Talking to The Kashmir Walla, Sports Council Secretary, Naseem Javaid Choudary, said that the activities will take place at different locations and not more than eight to ten people will gather in any match.

“This is a five-days activity, in which individual games are on the list,” he said. “All the participants will be properly screened at four checkpoints by the health department.” The event will have games including snow skiing, snowboarding, cross country race, snow show and snow cycling.

He further stated that after proper consensus over the prevailing fear of coronavirus in the world, authorities have made a decision to go ahead for the event.

The screening for the athletes participating in the event is expected to be done at: Jammu, Qazigund, Tourist Reception Centre, Srinagar, and Tangmarg.

National Health Commission, China, has confirmed the human-to-human transmission of the virus.

Prime Minister Narendra Modi on Wednesday announced that he will not attend next week’s Holi celebrations to avoid promotion of mass gatherings. In the wake of the epidemic, festivities at the presidential palace have also been canceled.

The players will be accommodated in separate rooms, claimed Mr. Choudary, and will not be allowed to assemble at one place – except the opening ceremony.

“We have booked separate rooms for the participants and there will be no joint food plans,” he said. “All will be served in their respective rooms for the safety.”

The games have been organised by J-K State Sports Council and sponsored by Union Ministry of Youth Affairs and Sports in various sports disciplines.

Previous articleCoronavirus in India: What can you do?
Next articleNo question of compensation to IT firms during lockdown in Kashmir: Govt