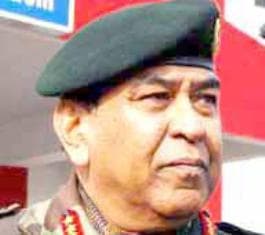 Army’s public relations campaign today went awry after police baton charged college and school children at a prize distribution ceremony resulting in injuries to an unknown number of students including six girls in this south Kashmir district. Among the injured girls four were identified as Bintul, Sheema, Umaira and Ruqaya from Goodwill school of Balapora in Shopian district.

Two girls were lying unconscious in the ground and one girl had suffered injury in the ankle after policemen baton charged college and school children who were present at the prize distribution function of the Half-Marathon organised jointly by the Army and the civil adminstration here, 40 kms from Srinagar.

Policemen went berserk after crowds began hooting alleging the contest was fraudulently held. Eye-witnesses said they saw at least two boys who were badly injured being carried away in an ambulance. At a makeshift clinic in the ground injured girls were being treated by medics with the first aid. Some students were injured in the ensuing chaos which led to a stampede.

General Officer Commanding (GOC) of Srinagar based 15 Corps Lt Gen Syed Ata Hasnain, who is on a campaign of “winning hearts” in the valley, left hurriedly after the incident. Hasnain, who was scheduled to distribute the prizes, made a failed attempt to calm the students saying he is here “to spread love”, however, his appeal made no impact on the students.

“I do not want to be embarrased like this,” Hasnain said as he boarded the vehicle and left the ground. It is a first heart breaker for the Army commander who has been maintaining that his main weapon is to win the hearts of the people.

Later, Army spokesman said the crowds were instigated. “I would not say the miscreants were present in the marathon. But you can see how the things started. Some people were instigating when the crowd gathered,” Lt Col J S Brar told reporters. Brar refused to comment on the police action. “I would not comment on this, it is a police action,” he said.

Earlier this month Army had organised a marathon run for the local youth of the district Anantnag as part of vigorous campaign to connect with the local population.

Hasnain, soon after taking over as the GOC of the Army in the valley, has been visiting different districts and meeting with the people trying to project a humane face of the country’s largest fighting force.