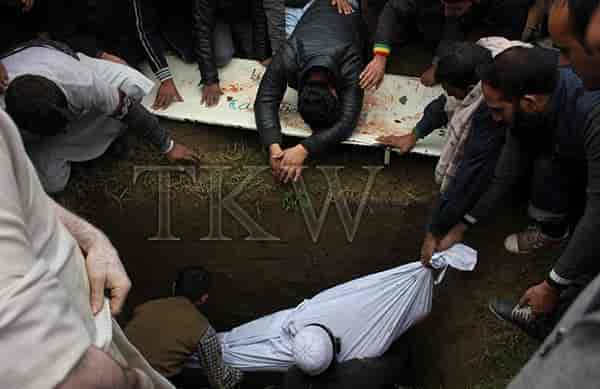 After two civilians were killed by army last evening here in Nowgam area of Kashmir, today early in the morning both the bodies were buried. The funeral prayers were attended by hundreds of men, as several people couldn’t reach due to the curfew imposed by the authorities in the area. Burhan Yusuf Bhat, 14, and Mehraj ud Din Dar, 21, were shot dead when they were on way to see a Muharram procession in the nearby area. According to the eyewitnesses, both of them including two more friends were in a Maruti 800 car and were showered with bullets at a checkpoint in Chattergam area of Budgam district. As per the army, the vehicle didn’t stop at the checkpoint, but eyewitnesses challenge this saying, “The car was stopped but a few meters after the checkpoint. Instead of waiting for them to stop or even chasing them down, the army started indiscriminate firing.” Among the two injured, one is said to be in critical condition, being treated at an army base camp hospital in Srinagar.