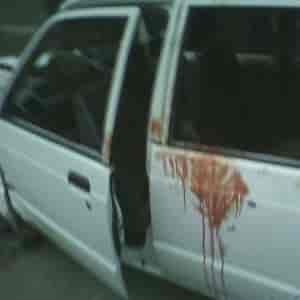 Two people were killed and two others injured when army opened fire at a vehicle in Kashmir on Monday evening.

The incident happened in Chattergam village of Budgam district, in which Faisal Yusuf Bhat and Mehraj Dar were killed and the two injured have been identified as Zahid Naqash and Shakir Ahmad Bhat.

Eyewitnesses told The Kashmir Walla that the men from 53-Rastriya Rifles of army tried to stop a Maruti car (JKOIR-321) at a barricade around 5:30 pm. “When the vehicle, for some reasons, didn’t stop the army-men opened fired indiscriminately.”

The injured were shifted to Army’s 92 Base Hospital. A defence spokesman told Kashmir News Service that based on the specific intelligence reports about the movement of militants in a white Maruti 800 Car along Nowgam to Pulwama road, three Mobile Vehicle Check Posts (MVCP) were established along the road.

“The injured were rushed to the Army Base Hospital, Srinagar. Two persons succumbed to their injuries and two are under treatment. Army regrets the loss of lives and has ordered an enquiry to investigate into the circumstance leading to the incident. Anyone found guilty will be severely dealt with,” he added.

Inspector General Police (IGP) Kashmir A G Mir said they have lodged an FIR into the incident. “Law will take its own course,” he said.

The Hurriyat Conference (G) chairman Syed Ali Geelani while condemning the incident said that the Indian troops are killing civilians which is highly condemnable. “People should show their anger against such killings,” he said.

With inputs from KNS