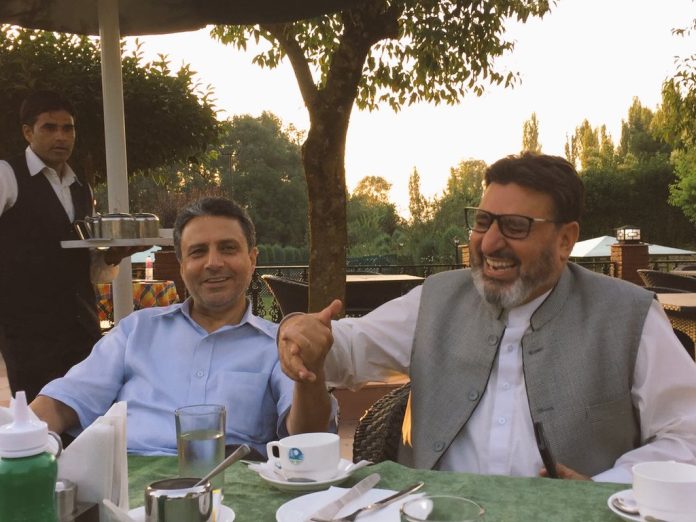 Srinagar: Apni Party General Secretary Rafi Ahmad Mir on Wednesday said the recent comments by the different political parties in PAGD have once again stirred confusion in the minds of the people.

He was flanked by Party Provincial President Mohammad Ashraf Mir.

Addressing a press conference at Party’s Central Office in M2 Church Lane, Sonwar, Mir stated that PAGD’s frequently changing political stances is testimony to the fact that they are deceiving the people for their political gains.

Referring to the recent comments made by PAGD leadership, Mir said it is now in open that there is no unity among this alliance and they have no concrete agenda for the people.

“We had already cautioned that this union was nothing more than an electoral alliance and DDC elections had nothing to do with the restoration of the special status of J-K.

It is pathetic they are now backtracking from the promise made with the people to bring back Article-370 & 35-A,” he remarked.

Mir asserted that NC being the old political party in J-K had enough opportunities which were never utilised for the welfare of people of J-K.

“It is obvious that history of J-K did not begin after 2014 elections but it must be recalled that after winning with a 2/3rd majority in 1996, NC leadership utterly failed to achieve anything concrete out of autonomy resolution with the then government and sufficed over a MoS portfolio. They have no moral stand to sermonize others for the blunders they have committed for decades all together,” he added.

Mir said that we have seen the incompetence of their elected MP’s who could not even have a reasonable debate in the parliament when the twin articles according special status to J-K were abrogated.

“They are seen speaking one thing in Delhi and another in J-K. People still remember their apologetic and non-serious faces on the floor of the house in 2019. They have no right to pretend to mourn over the special status when they had an ample opportunity to put forth the merits of twin articles before the House. It is on record that they deliberately chose not to speak on the motion and observe a criminal silence. ,” he observed

Mir said that it is appalling to see how weak and pacifist PDP has become after the passing away of Mufti Mohammad Syed as they are being viciously cornered by their own alliance partners today without any resistance.

“It is no less than a shock that Mehbooba Mufti is unable to defend the Party founded by her deceased father. This convenient silence only shows that PDP has failed to speak up for itself and it can in no way stand for the rights of the people,” he added.

Mir said that PAGD and its partisans have now lost their relevance in J-K’s political fabric and the cracks are only going to grow further.

“This mudslinging on each other is enough evidence that the future of J-K can never be secure under the rule of such chaotic and power driven political parties who can go to any extent to satisfy their greed,” he said.

Besides, Mir reiterated his demand for the restoration of statehood and called for early election in J-K so that the rights of the people are safeguarded.