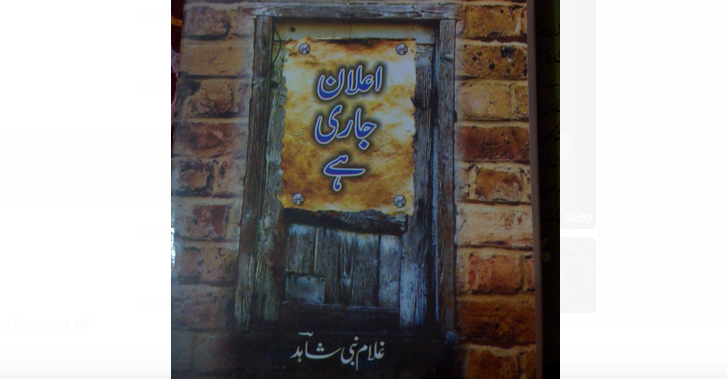 This is the translation of ‘Jawab Do’ – one of the 22 short stories written, originally in Urdu, by Ghulam Nabi Shahid in his book Eelan Jaari Hai (The declaration/announcement continues)

Heads lowered, all of them in small groups of two-to-three holding placards in their hands were silently marching towards the park located in the heart of the city centre where they would assemble on the 10th of every month to stage protests for the last so many years. Right in the middle of the city, and in between the two prominent markets, this park is centre of attraction for majority of people for its beauty and romantic atmosphere, especially during the summers. On the one side, facing the main square, a hoarding was erected just near the Chinar tree about three feet inside the iron fence of the park. In the backdrop the valley’s beauty, beautiful hills, waterfalls, streams and lakes were embedded with such deftness and dexterity that every single passer by would keep looking at the hoarding over and over again.

In the meanwhile, these people in small groups started entering the park and assembled near the big Chinar tree facing the main square. With her fatigued eyes, Khadeeja too started looking towards it with a placard in her hand. To her, the shade of the Chinar appeared like a deep black smoke. Moving away from the shade she proceeded towards the erected hoarding nearby with her back resting on one of its pillars. As the event began all the people assembled in the park picked up their respective placards in their hands to stage protest. The pedestrians couldn’t move an inch while seeing the demonstrators. They kept looking at them with a sense of dispossession and helplessness.

The protest continued. Khadeeja started looking at the people….She gathered some courage from inside… Slowly she stood up and lifted her placard towards the sky with her trembling hands… The assembled crowds on the roadside fixed their eyes on the upright hoarding on which the following lines were inscribed:

Right below this verse Khadeeja’s placard read: “mera Firdous kahan hai?” (Where is my Firdous? (Firdous, the name of Khadeeja’s son which when translated in English means Paradise)

In the Shrine of Laurence