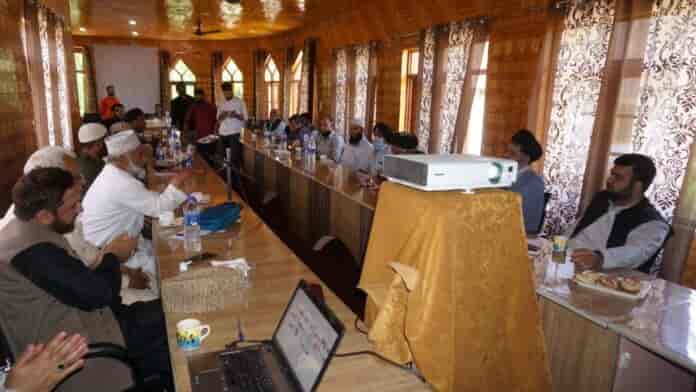 Srinagar: Jammu and Kashmir Anjuman Sharie Shian organised day long first interfaith dialogue ever held in Kashmir under the theme “Mitigating horizontal tensions through is the need of the hour”.

While reading the message of President J-K Anjuman Sharie Shian Aga Syed Hassan Mosavi Al-Safavi (who is under continuous house arrest since Aug 4th 2019) Anjuman Sharie Shian’s Aga Syed Mujtaba Abbas quoting Aga Hassan said, “I believe that the essence of belief in God and service to the people of God can be found in all Divine religions. This Conference, teaches us how to sit together for a dialogue according to the tenets of the Holy Quran and the way of life and conduct of the Prophet Muhammad (P.H.U.H) to make a safe and sound world free from “sectarianism, extremism , war and bloodshed”.

Adding that interfaith dialogue is essential to avoid fanaticism which leads to confusion, “The selfish evil forces with vested interest promote fanaticism to divide and to create communal disharmony to fulfill their selfish desires. But interfaith dialogue provides space for people of different religions to come together and discuss their religions, clarify the doubts and promote interreligious understanding and creates interreligious relations, which avoids frictions between religious and religious communities,”

The spokesperson further said in the joint resolution, “it was passed that Since Kashmir is a multicultural and multi religious society dialogue is very essential for the unity and well being of the Mouj Kashir. Plurality is a basic and fundamental fact of the Kashmiri society and everyone has to understand this pluralistic nature of Kashmir society. Every religion also has to be pluralistic in its own perspective and promote this pluralism among its adherents. Inter-faith dialogue has to contribute towards communal harmony and the welfare of the humanity,”

Also, joint resolutions unanimously condemned the recent attacks on various religious places in Srinagar and urged for unity among communities to thwart evil designs of vested interest and called for more such interfaith dialogue across Kashmir to bridge the gaps and let the flower of Kashmir’s brotherhood, amity, affinity bloom.

Previous articleCOVID-19: One policeman among 78 new cases in J-K
Next articleIndia-China standoff: Notes on Ladakh, strategies, and geographies