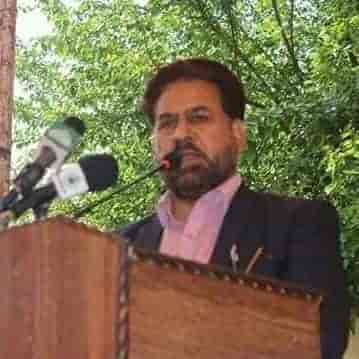 Expressing anguish over the usage of Chemical Weapons against Militants, Syed Manzoor said, “India has been violating all the human rights set by the United Nations and ridiculing the Warsaw pact by the usage of chemical weapons during gunfight.”

He said the Indian state is living in a denial mode and has even ridiculed the UN Report, which proves Indian state is intolerant to any kind of criticism and wants to hold Kashmir by hook or crook.

Manzoor said that India is trying to put the life of common people at stake for their electoral benefits as it is trying to hold elections by hook or crook. “Even though the two main regional parties of Kashmir have decided to boycott elections, the Indian state wants to go ahead, because it wants people of India to be deviated from the Rafale Scam, it wants to create deviations in the resolution of Jammu Kashmir,” he said. Adding that the Indian state does not want to risk the loss of its stooges, that is why they have kept the Islamabad Parliamentary seat vacant for three years.

He condemned the rigid stance of India over the cancellation of dialogue on the sidelines of UNGA in New York and said rejection of sitting on a dialogue table speaks of the volumes of Jingoism within the Indian state.

He also condemned the frequent Internet bans and said India wants to push Kashmir to stone age and said the youth of Kashmir are being forces to take extreme measures. “Many youth have not slept in their houses for months together for the fear of being arrested,” Syed Manzoor said.