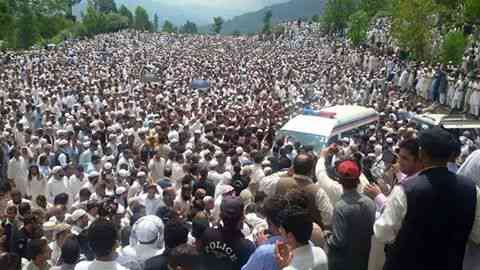 Admired by millions, Sardar Muhammad Abdul Qayyum Khan was laid to rest on Saturday amidst elaborate Islamic rituals at his ancestral home in small picturesque village of Ghaziabad in Azad Jammu and Kashmir (AJK).

The mortal remains of the 91-year-old freedom fighter-turned politician, who died on Friday last following a protracted illness, were lowered into the grave as thousands of teary-eyed followers bid farewell to AJK’s most popular political and spiritual guru who touched the lives of the common masses and elite alike.

Pakistan Military guards escorted his casket wrapped in national flag to final resting and gave him gun salute in military traditions. A contingent of AJK Police also presented a guard of honour to mark it as state burial.

The narrow lanes of Ghaziabad town were choked with influx of people pouring in from all over the AJK to pay their last respects to iconic leader who led the freedom struggle of Kashmir in 1947 and later ruled the liberated territory for long time.

Known as Mujahidawal (first crusader), the legendary leader left behind a son, Sardar Attique Ahmamed Khan, grand children, great grand children and large number of followers, fans and devoted admirers to tell the stories of his revolutionary life full of many highs and lows. The most significant thing he has left behind is his wonderful political legacy for his followers to cherish.

Born in April 4, 1924, Sardar Abdul Qayyum Khan rose to fame when he started armed struggle against despotic Hindu ruler of Kashmir in August 1947 at the age of just 23 years. In his quite young age, Sardar Muhammad Abdul Qayyum Khan led the freedom struggle and got liberated around 5,000 square kilometers area, now called Azad Jammu and Kashmir.

Sardar Abdul Qayyum Khan started his political career in early fifties from the platform of Muslim Conference, a party established by Sheikh Muhammad Abdullah, Chaudhry Ghulam Abbas and others. This was the very party that played a significant role in flaming the fire of freedom and kept the spirit of liberty alive in the hearts of Kashmiris for long time.

Being skilled organizer, hard worker, extremely committed to the ideology of Kashmir’s accession to Pakistan and having ability to rally the masses around him, Sardar Qayyum during his active political life made Muslim Conference a populist party and turned himself an iconic leader of the region.

Believing that AJK leaders should remain neutral in Pakistan’s politics till final settlement of Kashmir dispute, Sardar Muhammad Abdul Qayyum Khan had successfully maintained working relationship with different rulers in Islamabad right from Gen Ayub Khan to General, Zia, Benazir Bhtto, Nawaz Sharif and Gen Mushrraf except Bhutto with whom he confronted in 1974 when Bhutto extended scope of his party up to Azad Kashmir and dislodge his elected government through a no confidence vote.

It was his towering personality and political influence that Azad Kashmir remained a citadel of Pakistan’s defense and India never succeeded in orchestrating its terrorist activities in the region. Similarly, it was he who steadily integrated AJK society into the mainstream Pakistan and discouraged the Kashmiri nationalist sentiments to take roots in the liberated area.

In an environment where politics revolves around tribes and clans, Sardar Abdul Qayyum Khan did politics of principles binding the people in the bond of ideology, which was evident from the fact that Muslim Conference once was considered a beautiful bunch of all tribes and clans in Azad Kashmir.

Another important aspect of his personal life was that he had never run after the material things and lived a simple life not different from his ordinary political followers. Many people in Azad Kashmir know that he used to wear worn out long coat style Sherwani with hand- sewn patches on it during the climax of his politics.

The simplistic life style help him earned confidence of his followers and common people of Azad Kashmir who considered him someone different from just a politician. A devote Muslim in personal life and liberal in politics, Sardar Qayyum’s political philosophy and strategy made him equally popular in religious and moderates circles and he never faced divide in his party on religious grounds.

Being human being, Sardar Abdul Qayyum Khan was not quite impervious to human errors and omission. He might have committed mistakes that affected lives of people but overall his achievements and accomplishments made him the king of the politics, most humble contented and down to earth person.

People from all shades of life and across the entire political spectrum will continue to remember him as an authentic politician, a strategist and statesman who did politics as full time job with a sense of national duty, a religious obligation and a mission.

May Allah Almighty rest his soul in eternal peace and give strength to all his family members, friends and followers to bear this great loss.