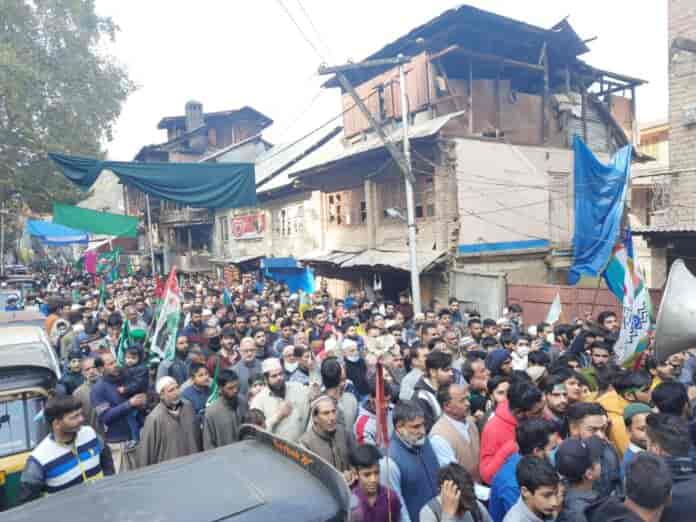 Srinagar: Marching through the lanes and streets of Anantnag township in south Kashmir, thousands of devotees, both women and men commemorated the annual birth anniversary of the last messenger of Islam, Muhammad (SAWW).

People in large numbers had made arrangements of food and other eatables for the marchers from various parts of South Kashmir, the Health department and the Municipal council had also made the arrangements for the commemoration.

Starting from the central mosque in Anantnag, Jamia Masjid, the procession marching through the streets of Anantnag township culminated at the martyrs graveyard of the township, where various scholars shed light on the life of the last messenger of Islam.

Addressing the gathering here, Qazi Ahmed Yasir, the chairman of Ummat e Islami Jammu Kashmir said that it is time for people to stop hurting the religious sensitivities of Muslims worldwide.

“Muslims do not hurt the religious sentiments of other religions and neither should their sentiments be hurt, we are one and condemn the caricatures of Prophet Muhammad being drawn in France,” he said.

Qazi Yasir said that the attempts to change Kashmir as it is, will not remain intact for a long time. Quoting a verse from the Quran he said, “Indeed, Allah is the best planner and only Allah’s plans will succeed.”

He expressed solidarity with the families of the slain youth and said that every Kashmiri remembers them and those who are languishing in various jails.