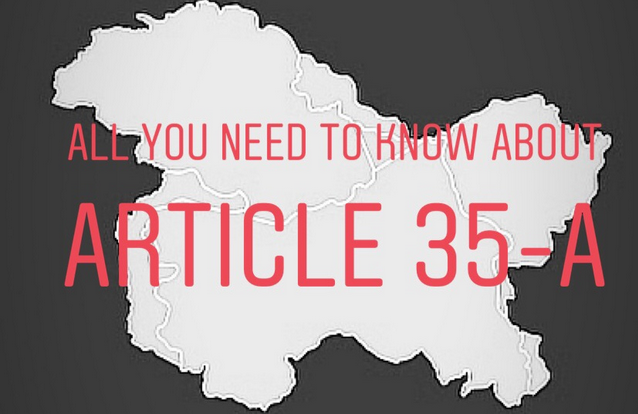 The people of Kashmir are observing a strict two-day shutdown – Sunday and Monday, in response to the call by the pro-freedom leaders ahead of the hearing over abrogation of Article 35-A in Supreme Court on 6th August. Government forces have been deployed across the Valley, including Jammu division too, while business outlets and educational institutes will remain closed.

The idea behind the two-day shutdown holds an utmost significance for the Valley. The Kashmir Walla sums up everything you need to know about Article 35-A, and where it stands for the people of Jammu and Kashmir.

Article 35-A has been in controversy ever since its incorporation in 1954, almost seven decades ago, as a part of the earlier Article 370, which gives a special status to the state of Jammu and Kashmir.

When India was under the British rule until 1947, the Jammu and Kashmir was a princely state, under the Dogra rule of Maharaja Hari Singh. The people of the princely states were not British colonial subjects, but, state subjects.

After the then Prime Minister of J-K, Sheikh Abdullah, took over reins from Dogra rule, he negotiated J-K’s disputed political relationship with New Delhi, leading to an agreement between him and Jawaharlal Nehru. The agreement extended Indian citizenship to the “State Subjects”, in the form of Article 370.

Later, in 1954, the then President of India, Rajendra Prasad, on the advice of the Jawaharlal Nehru cabinet, incorporated Article 35-A – defining state’s “permanent residents”.

Now, seven decades later, tensions are simmering in the state ahead of the hearing by Supreme Court tomorrow, and on the other hand, pro-freedom leaders are warning “mass agitation” on any “tinkering” with the constitutional provision.

Scores of protests have been held by the pro-freedom leaders, trade unions, Civil Society groups, and students in the Valley, Jammu, and Ladakh as well over past few weeks.

Why is Article 35-A so significant?

Primarily, Delhi-based NGO, ‘We the Citizens’, and a few other groups have been arguing that Article 35-A and Article 370 decimate against the citizens of J-K and the rest of the country.

Regardless of the arguments, the scrapping of Article 35-A, as per the experts, will lead to further erosion of the ‘remains’ of Jammu and Kashmir’s autonomy.

The Article today safeguards the resources of the permanent residents of the state and in the absence of it, people will be left with no special rights over their own lands. Anyone from outside the state can come and settle down, buy property, or start construction – which is seen as a threat to the state residents.

For Muslims majority population, mainly in Kashmir Valley, the scrapping of the Article is also seen as part of Centre’s policy to integrate the region with the country completely. Many in Kashmir claim that without this Article, there will be an influx of non-residents, backed by the government, to change the demography of the state.

ALSO READ: Protests to safeguard Article 35-A across party lines

Who wants it to be abrogated?

Many believe that the argument to scrap Article 35-A is a conspiracy hatched under the eyes of Hindu rightwing groups affiliated with the Bhartiya Janta Party (BJP), with a view to disturb the demographic character of the Muslim majority Kashmir valley.

Apart from the pro-India political parties, a Delhi-based NGO, ‘We the Citizens’, along with several other groups have also been arguing that Article 35-A and Article 370 need to be scrapped. The Petitioners commonly argue that the Articles decimate against the citizens of J-K and the rest of the country.

As per the NGO, the Article is against the “very spirit of oneness in India” as it creates a “class within a class of Indian citizens”. The petitioner also says that Article 370 was only a “temporary provision” to bring normality in the state after the Dogra rule. The NGO believes that the Article should be scrapped as it was never presented before the Parliament, and came into effect immediately.

As per another petition filed by J-K native Charu Wali Khanna, Article 35-A is as discriminatory against the women of J-K. The petitioner challenges the Jammu and Kashmir Constitution that restricts the basic right of property if a native woman marries a non-resident. “Her children are denied a permanent resident certificate, thereby considering them illegitimate,” the petition said.

ALSO READ: Protests to safeguard Article 35-A across party lines

Who doesn’t want it to be abrogated?

Since the death of popular rebel commander of Hizbul Mujahideen, Burhan Wani, Kashmir has undergone extreme violence, with killings of scores of civilians in clashes with government forces, and killings of hundreds of militants, followed by a crippled normal life in the state.

Regardless of the ongoing conflict in the Kashmir Valley, political parties – with mainstream and non-mainstream all having the same agenda, have come together to oppose any such move against the Article 35-A.

Unlikely, the two prime political parties of the state, PDP, and NC have come out against any changes with the Article, along with the support from pro-freedom leaders and Civil Society groups in Kashmir.

Former Chief Minister and PDP President, Mehbooba Mufti, in a recent rally held in Srinagar had said that safeguarding the special status of the State had always been her party’s top agenda. “Any tinkering would turn the state into a veritable inferno,” she warned.

National Conference President, Farooq Abdullah, too, kept his party’s intentions clear by warning the Centre that NC won’t support any tinkering with special rights and “honour” of the people of Jammu and Kashmir.

During a protest march recently held against the scrapping of Article 35-A in Kashmir, one of the high-held banners read loud and clear, “If there are no Articles 35A and 370, then there is no accession (of Jammu and Kashmir to India).”

What could possibly happen on Monday?

Like past instances, experts predict the apex court to once again defer the hearing on Article 35-A. On April 4, this year, the court had said that Article 370 has acquired permanent status, terming its abrogation “impossible”.

The state government has also asked SC to defer the hearing, citing the upcoming panchayat and urban local body elections.

In a letter to the Registrar of the Supreme Court, standing counsel for the state in the apex court M Shoeb Alam sought an adjournment in five petitions that were scheduled to be heard on Monday by a three-judge bench headed by Chief Justice of India Dipak Misra.

“… (The state) will be seeking an adjournment in the matters on August 6 on account of the ongoing preparation for the upcoming panchayat and urban local body and municipal elections in the state of Jammu and Kashmir,” the letter reads.

There are apprehensions that the court may shift the issue to the Parliament for a vote, which has also been the demand of many groups supporting the abrogation of the article.

After DDC elections, an uphill battle for PAGD

In Chadoora, many first time voters vote for family, friends — not development