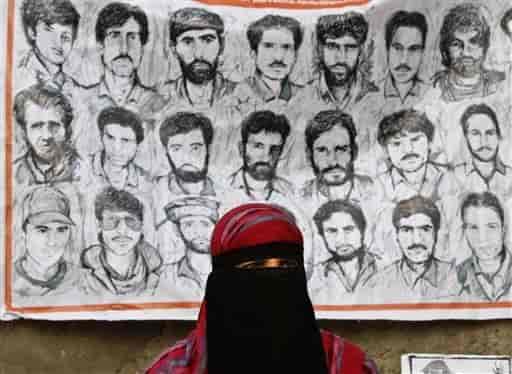 Srinagar, Indian-controlled Kashmir: Activists and families staged sit-in protests in Indian-held Kashmir on Tuesday to demand justice for torture and rape victims as well as answers about how 8,000 people allegedly disappeared in the conflict-ridden Himalayan territory.

For years, rights groups have accused Indian forces of using systematic abuse and unjustified arrests to intimidate Kashmir residents, many of whom oppose India’s rule over the territory disputed with Pakistan.

The regional government says the allegations are mostly separatist propaganda meant to demonize troops. It has acknowledged that 2,305 people have gone missing in the past 20 years, but says most had crossed into neighboring Pakistan for weapons training.

In a Srinagar park, more than 100 people sat for hours Tuesday with placards reading “Justice denied” and “Supreme Court: Does 8,000 disappearances concern you?”

Another four dozen or so people gathered in another Srinagar park with photos of family members who they say have vanished at the hands of Indian troops since 1989, when separatist Kashmiris launched an armed rebellion against Indian rule.

The uprising and subsequent Indian crackdown killed 68,000 people, though the conflict has largely subsided in recent years. Most anti-India opposition is now seen in street protests that regularly pit rock-throwing youths against government forces.

Emergency laws remain in force, however, giving hundreds of thousands of Indian soldiers stationed in Kashmir authority to shoot suspects on sight. The federal government in New Delhi has approved none of the 50 requests filed over the past two decades to prosecute soldiers.

On Monday, the Indian army’s northern commander said only 42 out of 1,524 complaints filed in two decades alleging abuses by soldiers were found to have merit. Lt. Gen. Sanjiv Chachra said those cases led army courts to punish a total 124 soldiers with prison, dismissal from service or loss of benefits.

Meanwhile, police detained at least 20 activists as they rallied Tuesday for an end to Indian rule, according to officer Abdul Rashid, who said the action was taken to prevent possible violence.