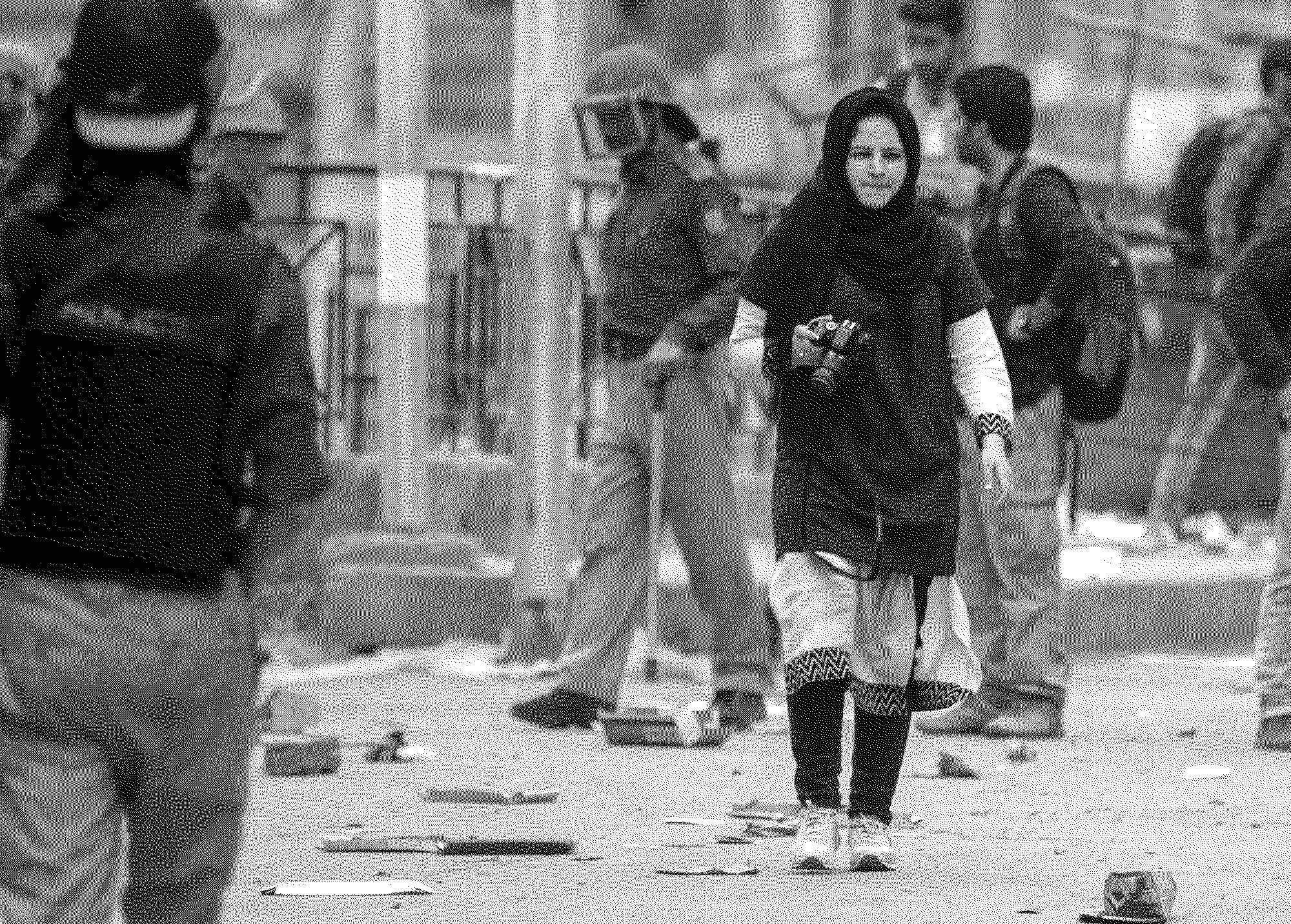 A female photojournalist, Masarat Zehra, was abused and accused of a being an “informer” of the army in Kashmir today, after she posted her photograph covering a gunfight between militants and the forces on social media. Zehra a post-graduate student of journalism at a university in Srinagar, also works as a freelance photojournalist. The 24-year-old has covered several protests, clashes and gunfights in Kashmir over the last two years.

The debate over her picture sparked when a few social media users shared her picture, claiming she was an informer of the army. But many came in support of Zehra, calling her brave and a promising budding professional.

The Kashmir Walla’s Yashraj Sharma spoke to Masarat Zehra over phone a short while ago.

How long have you been working as a photojournalist in Kashmir?

I have been working in the field for two years. You can find my work on international publication Getty images and others.

There are not many female photojournalists working in the field in Kashmir, is it difficult for you?

They discriminate between male and female. Kashmir is a male dominated society. Even my family is very conservative and they don’t support me in my work. As you know, nobody stood with Kamran Yousuf, I know that no one will stand for me either. I also spoke to photojournalist press association in Srinagar. They said, you are freelancer nobody will stand by you. Whenever, I’m in the field everybody stares at me. Sometimes I feel like I’m an alien. There are numerous issues while working in the field, if I’m shooting from stone throwers side, forces think I’m with them, and if I shoot from forces’ side, locals think I’m an informer. It is male dominated industry and you have to work with them all the time. They look at you with a different eye, either forces or stone throwers. It is a patriarchal set up. They ask us, ‘Why are you doing this, this is a boy’s job? Aren’t there enough boys in the field already? A girl cannot do this job of photojournalist?’

[quote_center]It is a patriarchal set up. They ask us, ‘Why are you doing this, this is a boy’s job? Aren’t there enough boys in the field already? A girl cannot do this job of photojournalist?'[/quote_center]

With this photograph of you being shared over social media of a recent gunfight, what do you have to say?

They called me an informer. But how can an informer post her own picture? They said, I’m an informer. They didn’t check my profile. People might throw stones at me. People will infiltrate my house think that I’m an informer and hurt me and my family in someway. This will definitely demoralize the upcoming female photojournalists from joining the field.

What do you want to tell those who abused you and called you an “informer”?

I just want to tell them to please cross-check the information and its credibility before posting it online. Social media is a very big platform, everyone is watching you.

How did your family react to this controversy over the photograph?

Someone told my mother that your daughter is injured, she sounded worried over the phone. I will only know their reaction when I reach home in the evening.

How do you see journalism in Kashmir?

There should be some norms and guidelines for freelancers from the press associations. All the places are occupied by big male names in Kashmir’s media industry. There are no recognition for interns and photojournalists. They blame us, the juniors, that we don’t know how things work here.

What was the most recent issues you faced with government forces while on field?

A month ago, I was covering stone throwing at Islamia college, the police’s Station House Officer on duty asked me to shut-down my camera otherwise he will snatch it. I even showed my press card but he didn’t recognize it. He manhandled me and snatched my camera and also tried to snatch my card but I didn’t let it loose. I tried to avoid any verbal conflict with him; he might target me later with pellets or even bullet.

How do you see yourself in this industry then?

I bring female perspective to the conflict, it is important. And that is why more women should come up. On the photograph controversy, the President of Photojournalist’s Association in Kashmir told me that I am a student and he can’t consider me as a photojournalist. “If you wanna file case against someone, association will not stand with you,” he told me.