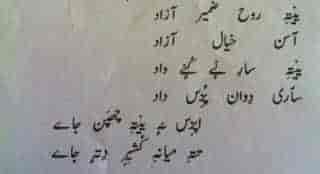 Abdul Sattar Ranjoor was a beloved poet, an honest politician and a fearless revolutionary. He was also my Dadaji (grandfather).

His integrity and intelligence commanded the respect of Kashmiris, especially peasants and workers, whose interests he championed through his poetry and politics. When he spoke, people listened, even those higher up in society. Time and time again, he used his influence to bring solace to the downtrodden. He opened his heart and his home to the people of Kashmir. His residence was an open courthouse; when people couldn’t acquire justice in actual courts they would come to him. He would patiently listen to their grievances in his lawn and find a solution.

Dadaji was madly in love with Kashmir and the Kashmiri language. Although he started writing in both Urdu and Kashmiri, he eventually made the conscious decision to write almost exclusively in Kashmiri. He always hoped and envisioned the best for Kashmir, as can be seen from his poem, Tati Myani Kashiri Ditte Jaay.

Where your soul and conscience is free

Where your thoughts are free

Where there is unison

Where truth is the guiding light

That is my Kashmir

Twenty four years ago on a cold March night, as winter came to an end, so did his life. His doors were open as usual, even for that militant who coolly walked through them, exchanged greetings, extended his hand took out a pistol and shot him point-blank. One bullet was enough to kill Dadaji but not his legacy.

Dadaji had known for a long time that his life was in danger but he was too in love with Kashmir to leave. He received several death threats but refused to let his family know. He insisted that he wanted to live in Kashmir and he wanted to die in Kashmir. At least both of those wishes were fulfilled.

Born to a peasant family, he came from a humble background. But from a young age, his spirit could not be contained. After his initial formal and religious education he set off to Lahore, Pakistan alone to expose himself to the unfamiliar. There he became close to renowned socialist, Chirag Hassan Hasrat and also met Allama Iqbal, a philosopher and poet who heavily influenced his ideology. He had left home as a curious Muslim boy and returned as a secular and progressive man.

Upon his return, he became more and more involved in Kashmiri politics. In the 40s he mobilized many villages in the non-violent struggle against Dogra ruler, Maharajah Hari Singh, as part of the Quit Kashmir Movement. As a revolutionary,he often went underground and spent time in jails. During this turbulent period in his life, he lost his first wife, mother and father to natural causes. His time in Lahore had also sowed the seeds of his Marxist ideology. In the 60s, he formally founded the Communist Party in Kashmir.

To many, especially the destitute, he was a beacon of hope. He often spoke out for his beliefs, which is perhaps what led to his tragic assassination. Militants wanted to eliminate moderate influential Muslims who wouldn’t tow their line, and Dadaji was at the forefront of resistance. His poem, Amnuk Paigham, exemplified the kind of bold stands he would take, even as the entire subcontinent was up in communal flames during partition.

Be aware, be ready, save the nation

Please do not bring shame to your heritage

You can never justify spilling blood

No matter if it belongs to a Hindu, Muslim or Sikh

You have to protect them all

It’s ironic that Dadaji was assassinated in the name of freedom, considering he was one of the first voices to advocate for Kashmir’s independence.

In a way, he thought beyond his time. Even before mainstream Kashmiri society envisioned independence as a concept, he wrote about it in the late 40s when the fiercely popular Sheikh Abdullah (Sher-i-Kashmir) cozied up to Nehru and accession with India. Shortly after Indian independence in 1947, as the Indian constitution was being framed, Abdullah was poised to sign an accord with Nehru. This is when Dadaji wrote “Kashristanuk Khayal”, a poem addressed to Abdullah.

I heard you have to sign an important document

Let no one fool you

His helping hand is an illusion

The poet and politician in Dadaji were inseparable. He would often address his constituency through lyrical verse. His poetry was rich with his political ideologies and philosophies. He wrote about freedom for Kashmir and freedom for the soul. He believed the two were inexplicably intertwined.

Your name is Azaad (freedom)

This is what I have heard for so long

The name of your village is Kashristan

Dadaji refused to forget Kashmir’s rich melancholic history. In his poem, Mondus, he wrote about the treacherous arrest and dethroning of the last independent King of Kashmir – Yusuf Shah Chak. Through his poetry he yearned for Kashmir’s political and spiritual recovery.

The moon was eclipsed and sorrow befell Haba Khatoon[1]

Our youth was struck by tragedy

Since then we are living through the misery of widowhood

May God restore the spring bloom and rejuvenate Haba Khatoon

He noticed that throughout history Kashmiris had very little say in their own fate. He wrote a poem, Akh Ghulam Quam, about the 1846 Treaty of Amritsar, between the British Government and Maharajah Gulab Singh of Jammu. This treaty formalized the sale of the entire land of Jammu and Kashmir to Singh. The people of Kashmir were never consulted.

It was traded by strangers

Fill the people with the spirit and passion for freedom

Dadaji’s poetry may have been written decades ago, but it is increasingly relevant to the conundrum of Kashmir today. As India and Pakistan wrestle amongst themselves, Kashmiris are still caught in the middle. In the following poem, he castigates India and Pakistan for trying to put the issue of Kashmir to bed without addressing its deep-rooted conflicts.

Instead of feeding him she sings him lullabies

She makes up stories to ease his conscience

She forces him to sleep

He is asleep for now

But for how long can he stay asleep

This hollow humming cannot keep him asleep on an empty stomach

Dadaji was quick to recognize tragedy but he also stood for resilience and optimism. He was extremely self-aware and considered his visions of Kashmir to add a little light to what was otherwise a place full of suffering. His poem, Sulichhukh Aamut, is a fitting testament to this very idea.

Oh kind soul, you arrived early in these terrible times

But you arrived in winter

When it is icy and frozen all over

Twenty four years have passed since my Dadaji passed away. I turned twenty this year. Every year I return to our home in the village of Keegam in Shopian; with my brother and my parents, I place flowers on his grave. There is tight security around our home now but this doesn’t stop people from walking in and out the doors and feeling at home.

I never met Dadaji but I often see him through the monochrome photo that hangs above my parent’s television. He wears a karakul hat and thick black-rimmed glasses. His expression is stern, and somewhat deceiving in light of the warmth he was known to possess.

When I return to Keegam I am surrounded by the love of my cousins, uncles and nieces but even without knowing Dadaji, there is a palpable void of what could have been. From time to time I think about how my life would be if he were still alive today. The writer in me wonders about the writer in him.

[1] The wife of the last independent king of Kashmir – Yusuf Shah Chak.

A doctor from Ladakh