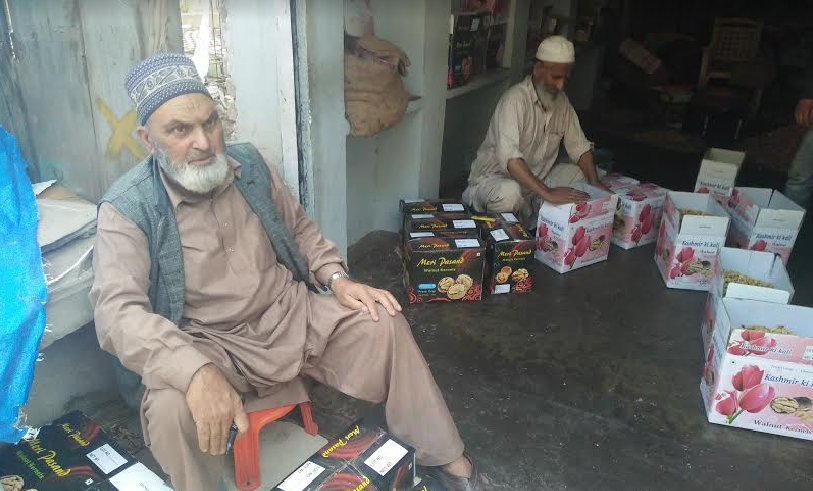 Nestled in the lofty mountains, a walnut market is ever-occupied with the hustle-bustle of the locals, punctuated by the incessant honking of the passing trucks. But despite the copious beauty all around the market in Laghama village of North Kashmir’s Uri – 102 kilometers from Srinagar, the dull faces of the walnut businessmen speak a different tale.

Among the walnut traders in the market is Haji Mursaleen Beigh, 72, who says that the walnut business is inherent, as everyone in the village is engaged to the age old legacy in one way or other.

Claiming to be younger and wiser than Prime Minister Narendra Modi, Beigh also says that the life of every worker in the walnut industry has come crumbling down to nothing since the Goods and Services Tax (GST) was introduced by the Modi led government last year on 1 July 2017.

Affecting the business community across the country, the GST is an indirect tax levied on the supply of the goods and services on every value addition. The passing of the GST law also replaced many indirect tax laws that previously existed. It also includes 5% GST on the walnut industry that has caused a deep turmoil to the walnut business of the Kashmir Valley; putting lives of traders like Beigh in stress.

Jammu and Kashmir alone contributes to more than 98 percent of the total walnut production in India, as per documented by Naseem Qammer and S. H. Baba in their research paper on “Export Performance of Indian Walnuts”.

As per the data, the country’s share in the overall walnut export has reached about US $40 million, yet its export constitutes only 2.73 per cent and 0.10 per cent of world export of shelled and walnut with shell, respectively. In 2015, India exported 3292mt to the world for the worth of Rs.117.92 crore while in 2017, exports came down to 2191mt worth Rs.55 crore only.

For walnuts from India, major export destinations include France, Germany, Netherlands, United Kingdom, and UAE among 90 others. However, Uri is one of the rarest destination for shelled walnuts. As demand for shelled walnuts is increasing in the domestic as well as international markets, the production cost is doubled up due to the implementation of the GST.

Adding to the woes of already vulnerable industry, the government has continued with poor strategy like importing walnuts from other countries. “We are not only competing with big corporations that process the shelled walnuts artificially. We are also competing with our own government that was supposed to help us in the first place,” says Mansoor Ahmad, a factory worker in Uri, with sunken eyes and sulking face.

For workers like Mansoor, it hard to sustain as the prices of walnuts have abruptly fallen down while the labor cost has increased alarmingly. “Till 2013, we used to get Rs. 1200 per kilo and now we make only Rs. 500-600 per kilo,” adds Beigh. “Earlier there were 10,000 people who were involved in the business of walnuts. The number has been reduced to 1000-1200 people only.”

Located in a difficult terrain, the walnut industry requires more manpower and less technological aid. Being purely organic in nature, no fertilizers are used on walnuts. Thereby, retains high amount of nutritional value among the dry fruits.

From collecting to processing and packaging, every activity is hand-based. The workers also brave the consequences and gather walnuts from the trees that are atop the dangerously uneven hills.

According to the officials of a walnut factory in Uri, at least 5-8 casualties per year. This happen while climbing the trees to pluck walnuts. “A 35-year-old worker died last week from falling off the tree while plucking the walnuts. No media coverage was given to him. Our miseries are conveniently ignored by everyone in power,” says a worker at the factory, while stuffing the walnuts in a box.

These industry workers in Uri urge the government to relax the GST rates for the small industries whose turnover is around 1-1.5 crore. “If the government continues to ignore our miseries then the whole narrative that they are propagating of Sabka Saath Sabka Vikas would prove to be a well-constructed lie,” adds Mansoor.

However, Beigh still looks forward to Diwali with the same fervour as any child who loves crackers would. “We have never celebrated Diwali but it’s the festival we wait for. The demand for our walnuts is at peak during the month of Diwali,” he says, while his ever-dismal face throws a big shining smile.