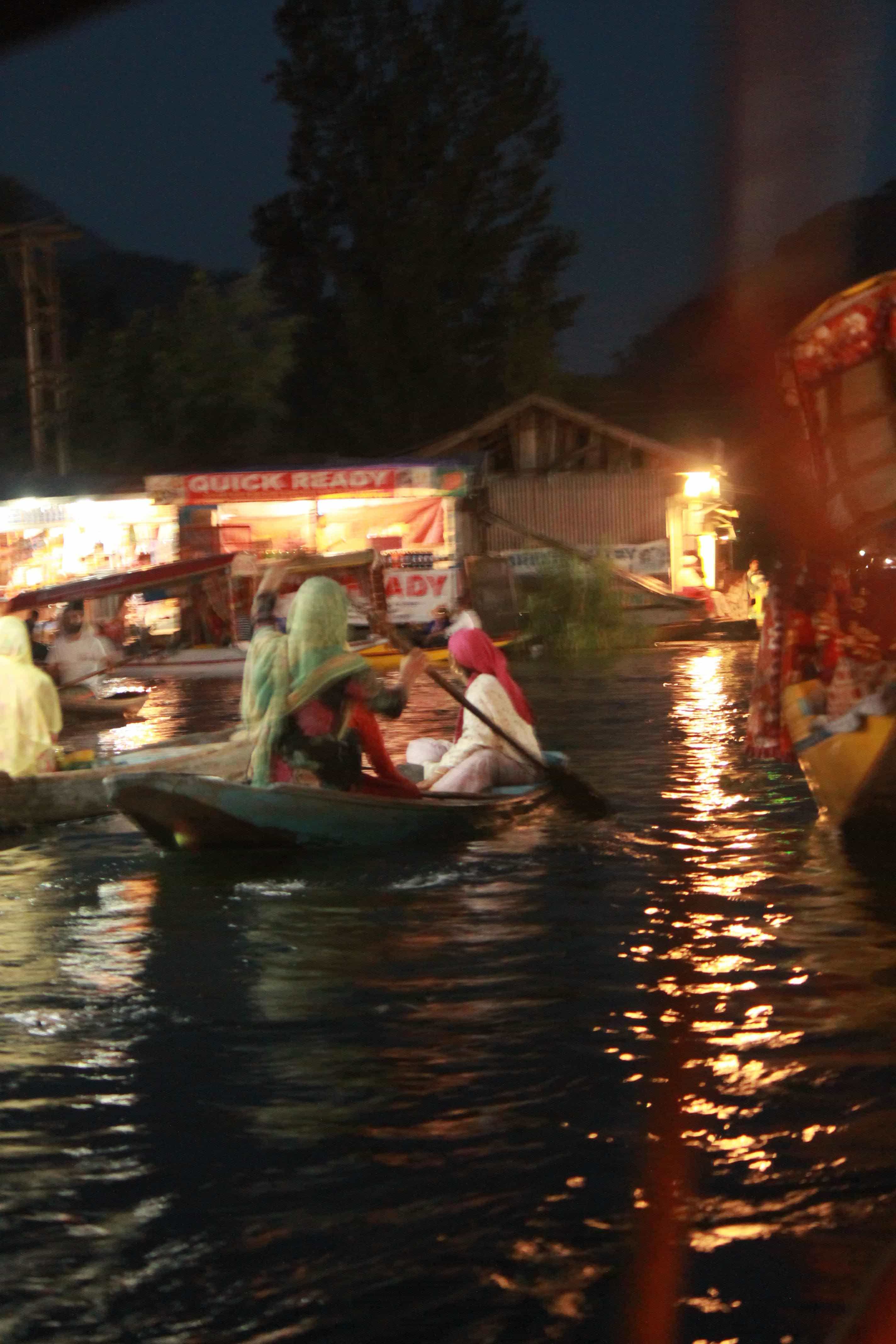 A tourist’s apathy and Kashmir’s reality run in close parallels. Any preliminary research for traveling to the troubled territory will tell you the land is safe for tourists. A summary of the eloquent reviews will be: ‘nothing that happens in Kashmir will bother you, you can have a good time’. The imagery this line evokes is of flashy baraatis on their ghodis dancing away in a roped in space alongside frustrating, hardly moving traffic.

The whole tourism system is designed to leave you chanting hami asto hami asto, unless you listen closely to what the Kashmiri says. The Shikara guy who rides you to the handicraft store will prep you up to loosen your purse strings, ‘thode paise humare desh mein bhi chodd ke jaana’. An early morning boat ride to the floating market on the Dal lake will leave you encountering a jolly old man who flaunts his life’s mantra with arms wide spread, ‘work like a coolie and live a prince’ only to promptly follow it up with ‘X hatao, Y ko lao, woh humein jeene nahi dega’. A casual bargain with the saffron seller will provoke him to say ‘humein kal ka nahi maloom aap kabki baat kar rahe hai’.

Caught between these subtle and intense emotions were a bunch of sixteen vegetarian Marwaris who ended up in Kashmir on Burhan Wani’s death anniversary week last July. We couldn’t have chosen another time, it was to celebrate our grandparents’ 50th wedding anniversary and those dates are set in stone. We couldn’t have chosen some other destination either because Kashmir held a special place in my grandmother’s heart and things that find a place there are non-negotiable too. So our collective strategy was to maintain the headcount on our way out of Kashmir. Mortality was our only fear, misplaced of course because ‘tourist ko koi kuch nahi karega’. Somehow that met with a sigh of relief; remember the baraatis? The traffic ain’t their problem.

And traffic there was. The Amarnath yatra killings happened a day before we were to leave for Pahalgam. So we decided to stay in play another round of cards until it felt right to travel again. Then came martyrs day which became an excuse for my brother and I to rescue ourselves from paneer and stuff some kebabs. We heard of shootings in the old city, that some young boy was killed, we thought it best to go visit the Mughal gardens on the other side of the city instead.

We were the nice tourists, because in Gulmarg we met the weird ones. It literally rained on our parade and sixteen horses took shelter under a tree. This tree had occupants, ten Marathi men in varying degrees of drunk. Actually, I think a couple of them were perfectly sober. They dint seem to know each other too well, must’ve been those package tourists. The drunken most old man, leading with his belly kept telling the Kashmiri horse-keeper ‘kaiko margarmari, milke rehneka’, he was still the better of the lot. Two of the sober ones insisted the horse-keepers chant bharat mata ki jai, a pretty popular slogan off late. The Kashmiri horse-keepers remained calm, the Marathi men grew louder as did the rain. The horse-keeper for Chulbul Pandey (I think that was the name of my horse) replied in a very as a matter of fact tone ‘hum sirf allah ke saamne sir jhuka sakte hai’. What I thought was a witty argument, the Marathi men thought was the root of all the instability. Heated words followed and I sat clutching Chulbuls reins tightly, anticipating a big fight to break out. But the horse-keepers knew that azadi was not to be sought under a tree and certainly not against dimwits.

The rain had quietened and we set off again, eager to reach our cars. I got off my horse and asked Gulla (name changed) ‘does this happen often?’ He said ‘aap humare yahan aaye ho, araam se dekhiye humara desh kitna sundar hai’.

And just like that tourists were shown their place, there was nothing more expected of them. The famed Kashmiri mehmaan nawazi won. The uniformed persons gradually began to blend with the turquoise and green backdrop. Our fears of travel, the right day, the right time, did not translate into an understanding that these fears are a Kashmiris everyday.

All events are narrated from memory, of which she enjoys the curse of a video graphic one. It’s a silent video memory so words like ‘desh’ could have been ‘mulk’, but nothing has been changed to make it more dramatic than it already was.