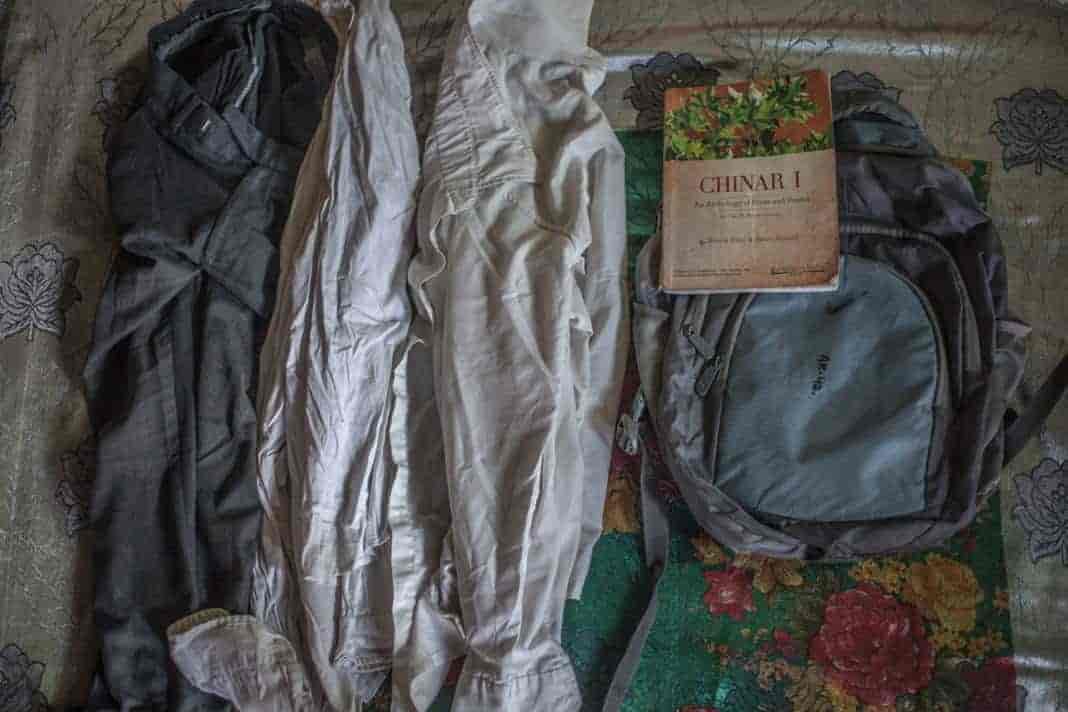 “Don’t worry, I’ll be back soon. If I’m a part of his funeral, Allah will bless us all,” 17-year-old Zubair Ahmad Nengroo told his diabetic mother, Mehbooba, while leaving home to attend the funeral of popular militant commander Saddam Hussain Padder on the morning of 5 May 2018.

As it turned out, Nengroo managed to be a part of the funeral procession, only to return to his village, Aveen Gund of Pulwama – 40 kilometers from Jammu and Kashmir’s summer capital Srinagar, on the shoulders of locals – blood stained and dead.

After three bullets had pierced into his abdomen, Nengroo succumbed to his injuries at the Shopian hospital gate. When doctors declared him brought dead, locals who were accompanying him informed their families and friends to convey news of his “martyrdom” to his family.

His family had just moved to their newly built house in Aveen Gund village on the same morning. On that unfortunate day for the family, his cousin Burhan had asked him to stay at home and help the family in moving stuff from their old house, which is just a few meters away from the new house.

“He always told me that he wanted to study more and do something great in his life, unlike us,” says Burhan.

Nengroo was the youngest son among three brothers. His eldest brother drives an auto-rickshaw for daily wages while his father sews clothes to pay the bills. Mehbooba, his mother, struggles with her eyesight and is on regular medication.

“On the evening when Zubair got martyred, his mother had to take her medicines; no one knew about her medicines, only Zubair knew,” says Burhan, while Mehbooba walked out of the room, as men started flowing in to offer their condolences on the fifteenth day since his death.

His father, Muhammad Rajab Nengroo, sitting with a hung face, grey beard and colorless eyes, shrugged the numbness by saying, “I don’t remember anything about his last day. I didn’t even see him leaving for the last time. I was sleeping when he left.”

The news of the encounter of militant Saddam Hussain Padder and his four associates including Mohammed Rafi Bhat, a Ph.D. scholar and an associate professor at the Kashmir University suffocated South Kashmir with grief and led to hundreds of locals coming out to attend Padder’s last rituals. Zubair was one of them.

“The encounter was over; we were on the other side of the road,” claimed Irshad, a local who was with him at the funeral in Nagbal area of Shopian district. He cleared his voice and continued, “While Zubair was crossing the road, army personnel from the passing-by vehicle target fired at him. It was a target fire. He didn’t even have a stone in his hands when they fired at him. He was innocent. It was intentional. They did it on purpose.”

Irshad looked in the dead eyes of Zubair’s father and said, “He could have been saved. The RR [Rashtriya Rifles personnel of Army] people didn’t even let the ambulance enter the area to take him. The locals drove him to Shopian district hospital in their own Maruti 800 [car]. The army didn’t know about [Maruti] 800 taking Zubair, otherwise, they won’t have let them proceed.”

As portrayed by his family members, Zubair was the softest sibling in their entire family. “As I said, he was so busy with his mother that he never thought about anything else. The protest is a far call. I don’t know why he went that day; it is all written by Allah,” sighs his classmate, Nawab. Burhan took this reporter to Zubair’s old house, footsteps away; wrecked and lifeless.

“This is the room. All five of them lived in this single room only,” says Burhan. The room was stagnant; it hadn’t had a breath since the day of his death. The unwashed utensils, a partially unpacked sewing machine, and the strewn clothes narrate the short-lived life of their child.

A teenage looking girl from the family brought a bag and school uniform of Zubair, kept in the closet; far from his mother. “We hid it. She (mother) will cry. She cries. She might not be able to control her emotions if she encounters them,” the girl confronted.

On brushing off the dust from the bag, one could see “A.K.47” scribbled on the top of it, and a book “CHINAR-1 ‘An Anthology of Prose and Poems’” inside. A pen and seal-packed blue-ink refill were in a pocket. The creased white shirt and a washed black trouser were left unused for days now.

Burhan burst into tears while saying, in a crippled voice, “At first phone call, we didn’t believe it. We thought he was just a child. Why would someone shoot him? But later when the similar phone calls started flooding in, we were shattered.”

Along with some locals, Burhan took us to the nearby Shaheed-Mazaar (martyrs’ graveyard) where Zubair was buried. “On that day, three different people asked him to go home at three different times but he didn’t,” someone at the graveyard said. Out of suspicion, a few smaller children started to appear from behind the fence. As we were standing by his gravestone, a boy whispered, “Now, his mother will die soon. Without Zubair, she can’t survive any longer.”

When asked upon the number of civilians killed in Pulwama, another young boy surrendered that they have lost the count now.

On coming out of the graveyard, 11-year-old, Munib Ahmad Dar appeared and started walking next to me. He held my hand and said, “I didn’t stop him that day. If I had, he would have stayed for me. But I didn’t.”