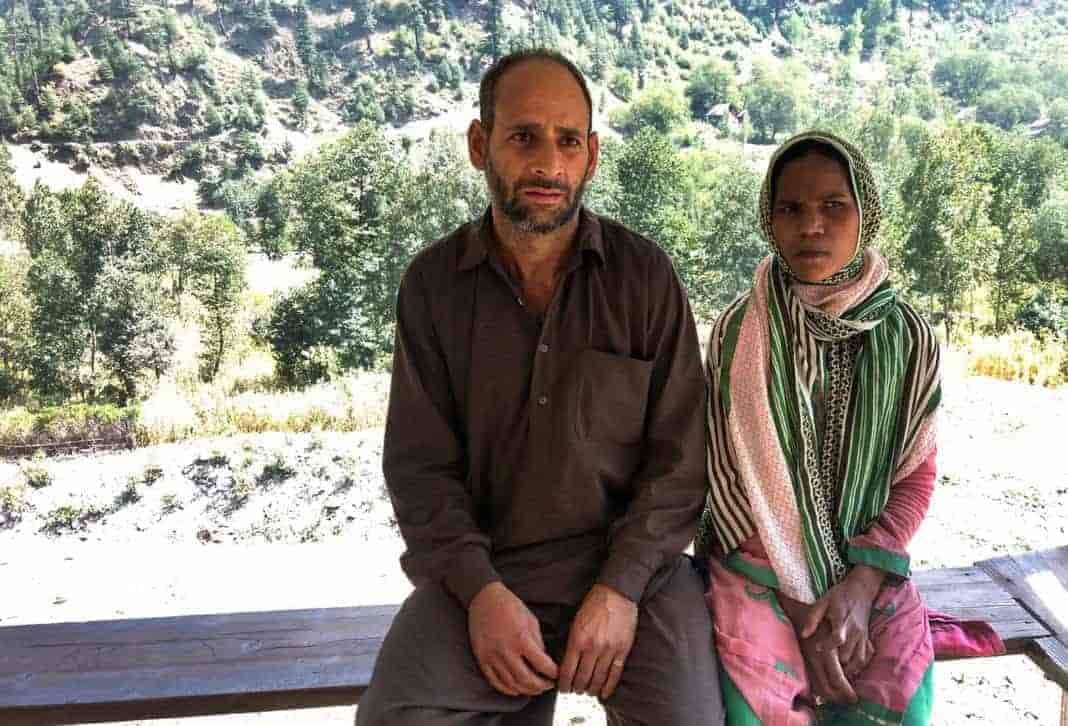 Fifteen years ago, Khushboo Jan traveled all the way from the red corridors of India to the conflict ridden Kashmir Valley. It was unfathomable to her then that her life would take a turn as different as the terrains from Jharkhand to Kashmir.

“I came along with a few other girls of my age in search of work. We were accompanied by an agent whose name I don’t remember,” she narrates quietly.

Jan worked as a domestic help in Srinagar when she met Mohammad Ganaie, 45, who worked as a chapati-maker in the city. “I changed my name from Pushpa to Khushboo when I came to Srinagar. I also met Mohammad Ganaie who later proposed for marriage,” she says while she narrates the confusion she faced at that time.

“Despite knowing the fact that he was already married and had children, I said yes to him as he has always been a kind human being,” she says with a faint smile.

But on 23 August, Jan’s life received a major jolt when her daughter, Muskan, went missing. “I asked my daughter to go and buy some vegetables from a local shop. She asked me to give her an extra 10 rupees for ice cream, and then she went off with her younger sister, Shabnam,” she recounts the last conversation she had with her daughter.

The horrific incident that shook the entire state of Jammu and Kashmir came to light on Sunday, 2 September, when the mutilated body of Jan’s nine-year-old Muskan was found in the forest of Boniyar in North Kashmir’s Baramulla district.

“I never thought jealousy and hatred could be so powerful,” she says with a numbness in her voice. “Jealousy and hatred drove Fahmeeda to such an extent that she made her son and other men rape my daughter. They also gouged her eyes out and mutilated her body with acid.”

The accused, Fahmeeda, who is the first wife of Mohammad Ganaie, has confessed to the hideous crime. According to the police officials, Fahmeeda and Khushboo never got along well. Fahmeeda took her vengeance on Jan’s daughter as she was envious of the attention that Khushboo and her three children — Muskan, Shabnam and Faizan — received.

A small crowd of onlookers has gathered at the passenger shed in Liddi village after hearing the loud wails of Ganaie, who says, “I want the real culprits to get punished! My son and wife are being framed.”

While Jan’s husband continues to plead his first-wife’s innocence in the background to his own personal audience, Jan silently watches him sinking into denial. Giving details of the case with teary eyes, the Senior Superintendent of Police (Baramula) Imtiyaz Hussain said, “While Fahmeeda was on the way to forest with her stepdaughter, she signalled her son, Sahil,14, to be ready.”

Hussain added that her son joined Fahmeeda in the forest area along with two of his friends, Kaiser Ahmad, 19, and another 14-year-old boy from Trikanjan, Boniyar. As per the case details, they all took turns to rape Muskaan before her stepmother strangulated and killed her mercilessly. All the accused are now locked up in Harwan jail – in the outskirts of Srinagar.

This brutal incident has left Khushboo Jan numb with wounds that refuse to heal easily. “I was waiting for her tenth birthday so that I could visit Jharkhand with my husband and children, but now I don’t think that I will ever go back to Jharkhand,” she says while her husband talks about how his family has always lived in harmony.

Jan had never expected that in a foreign land she would be embraced with love by strangers, and yet, get betrayed by her own family.