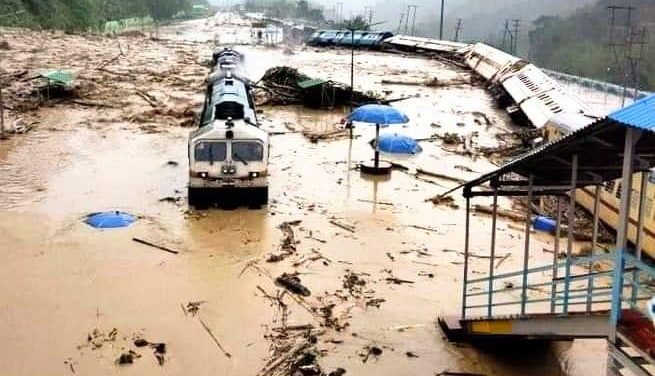 In flood-hit Assam, over four lakh people are affected due to floods and landslides in 26 districts while 8 persons lost their lives, media reports said.

About 40 thousand people are shifted to temporary relief camps.

Meanwhile, Northeast Frontier (NF) Railway said, a massive landslide in over 50 locations spreading all over the Lumding – Badarpur hill section has completely disrupted the rail communication of the hilly states of Tripura, Manipur, Mizoram, and South Assam with the rest of the country since last Saturday.

The railway is working on war footing to restore rail connectivity. Meanwhile, Home Minister Amit Shah has expressed concern about the situation in the wake of heavy rainfall in parts of Assam.

He spoke to Assam Chief Minister Himanta Biswa Sarma to take stock of the situation. In a tweet, Shah said NDRF teams have already been deployed.

He assured all possible help from the central government.