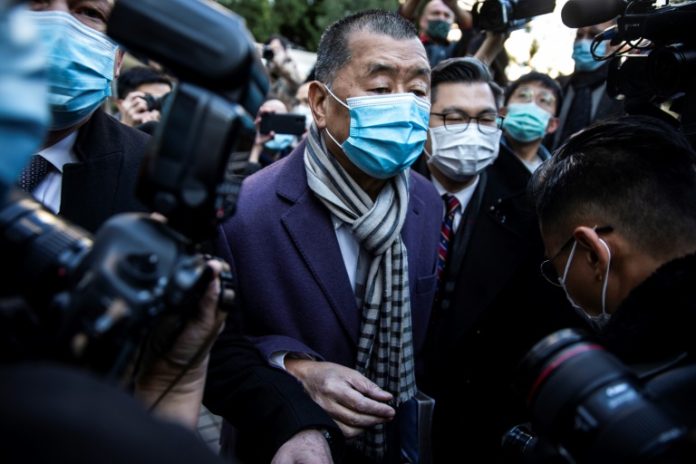 Hong Kong: Jailed Hong Kong media mogul Jimmy Lai was among three democracy campaigners convicted of taking part in a banned Tiananmen vigil as the prosecution of multiple activists came to a conclusion, reported The Guardian.

Authorities charged more than two dozen pro-democracy politicians and activists over a vigil last year, which commemorated the victims of Beijing’s deadly crackdown in 1989.

The trio were the only ones to contest their charges in court, meaning they were the last to receive their verdict.

Hong Kong’s district court convicted them of charges including inciting and taking part in an unauthorised assembly.

Lai, Chow and Ho are among dozens of activists already behind bars facing separate prosecutions under a strict national security law that Beijing imposed on Hong Kong in the wake of huge and often violent democracy protests two years ago.

But their prosecution is the latest illustration of how much the gap has narrowed between Hong Kong and the mainland, where authorities have long sought to scrub memories and official records of Tiananmen.

For three decades, Hong Kong’s annual 4 June candlelight vigil would attract tens of thousands of people, which – with its slogans for democracy and ending one-party rule in China – became a symbol for the political freedoms enjoyed in the city.

A photograph of the Disney+ television schedule in Hong Kong shows the Simpsons episode 12 missing from the listings. The episode shows a reference to the 1989 Tiananmen Square massacre.

But Hong Kong authorities have banned the last two vigils citing both the coronavirus pandemic and security fears.

This year, Beijing made it clear it will no longer tolerate Tiananmen commemorations in Hong Kong or Macau, the only two places within China where public remembrance could take place.

Multiple organisers of the annual vigil – including Chow – were charged with the national security crime of subversion while a 4 June museum they ran was closed by authorities and its exhibits carted away.

Unlawful assembly prosecutions have been brought against activists who took part in both the 2020 and this year’s banned Tiananmen vigils.

Previously, 16 politicians and activists – including prominent campaigner Joshua Wong – were sentenced to six to 10 months in jail over their roles in the vigil, with a few granted suspended sentences.