Lockdowns are part of life in Kashmir and so are sudden surges in cases of anxiety disorders and depression. Sixty-year-old Abdul Rashid has been violent for the past two weeks, picking fights with his neighbours and getting into rude verbal duels. “It is the impact of the lockdown,” said his 27-year-old son Ali*.

Mr. Rashid has been on medication for Bipolar Disorder since 2005. He had reacted similarly during the lockdown last year in August, said Ali. “My father feels suffocated,” he said. Adding to their worry is the suspension of counselling sessions due to the coronavirus pandemic.

With the lockdown in place to contain the spread of the pandemic and hospitals restricted for patients with severe illnesses, many like Mr. Rashid’s son finds it difficult to seek help for family members suffering from mental ailments.

At a time when nations all over the world are struggling with the economic crisis arising out of the pandemic, health experts indicate that mental health disorders are quietly on the rise. The World Health Organisation has warned that there is already “an increase in the anxiety people are experiencing.”

The countrywide lockdown since 24 March has brought back memories of August 2019 for 21-year-old Asmat Pandith, a native of north Kashmir’ Baramulla district and currently enrolled in a Bachelor’s course in a Delhi college. “These are unprecedented times and yet we have this kind of thing happening. It put me in a lot of stress, similar to how I felt back in August,” she said over the phone from Delhi.

In Delhi, since the lockdown, she found solace in engagements over social media but it soon became “toxic”. Her first panic attack occurred when she learnt of Kashmiri journalists being booked under the anti-terror laws over social media posts. “It started with a stroke of anxiety, then came depression and I sank deeper into a black hole and I could not get out of it,” she said.

Being confined indoors has aggravated pre-existing symptoms besides causing fresh ones in individuals, explained Dr. Mudassir Hassan, assistant professor and clinical psychologist at the Government Medical College in north Kashmir’s Baramulla. “The fear of contamination, for instance, and the necessity to wash hands repeatedly compounds the condition of an OCD [Obsessive Compulsive Disorder] patient,” he said.

Dr. Hassan observes that there is an increase in the number of youth seeking help for anxiety disorders. The increase in anxiety disorders among the youth could be directly attributed to them being “better informed of the effects of the virus”, said Dr. Hassan. “People tend to be very stressed and anxious about what will happen.”

Suspending physical counselling sessions, except for hospitalised covid patients, has meant that the bulk of patients have to rely on phone and internet-based counselling. Already, there is a “threefold” increase in the pressure on the mental healthcare fraternity in Kashmir, according to Dr. Sadaqat Rehman, assistant professor and clinical psychologist at the Government Medical College in Srinagar.

While older patients with a history of mental illness were more prone to sliding into depression, Dr. Rehman reaffirms Dr. Hassan’s observation that mental health issues were affecting the youth more. “They worry for their future, studies, and career,” he said.

Finding help in a lockdown

The Indian Association of Clinical Psychologists has set up a vast network of doctors across the country offering counselling, throughout the week, over the phone and WhatsApp. Depending on the case, they even attend video calls. However, the helplines are sometimes out of the reach of Kashmiris owing to the sudden and sweeping restrictions on communication facilities.

Mobile phones were shut for three days (the blockade continued for two more days in southern Kashmir) while the internet was suspended for nearly a week after government forces killed two militants in a confrontation that claimed a civilian’s life in south Kashmir’s Pulwama last week. Prior to that, the Internet in Kashmir was shut for nearly six months since 5 August 2019, prompting many to regard it as the longest shutdown of the internet in a democracy. Since February this year, high speed mobile internet has remained restricted owing to “threats to national security”.

As the world shifts to working online to reduce physical contact, Kashmiris find themselves with little options besides accepting and navigating around the restrictions. “Lockdown is not a new phenomenon in Kashmir but coronavirus has added a new dimension to it,” said Dr. Abdul Majid, associate professor of psychiatry at Sher-i-Kashmir Institute of Medical Sciences in Bemina, Srinagar.

Despite the availability of a helpline Dr. Majid said that he dealt with about 30 to 35 patients everyday. “The basic issue is that everyone is under stress,” he said. “For many who have recently developed mental health conditions, they fear for their lives and for that of their loved ones.”

Dr. Majid is also fearful of his own safety and that of his family. Even though Kashmiris have become resilient over the years owing to frequent lockdowns and natural disasters this time, he said, “not only is there a threat to life but despair from the anticipation of a lonely death and a funeral that nobody will attend.”

* Names of some people have been changed upon request. 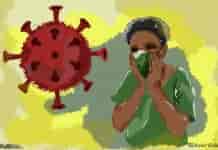 Kashmir’s ill-armed front against COVID-19: A nurse’s tale of survival 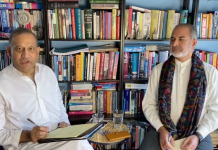 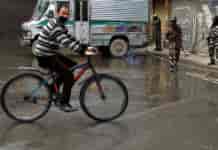 In COVID-19 lockdown, what are young Kashmiris doing at home?