Two days after a Pulwama youth complained about the facilities at the quarantine centre in a Facebook and Twitter post, the authorities have filed an FIR against him for allegedly causing trouble at the centre.

On 28 March, Owais Manzoor, a scholar at Jamia Milia Islamia, New Delhi, had posted pictures and videos on Facebook complaining that he fears he will contract coronavirus inside the quarantine centre.

In his Facebook post, Mr. Mansoor had written:  “I reached the centre immediately. But after reaching the facility I found myself in more danger than before. There are six people in one room. The bedding has been used before. Four people in this room are from Tablighi Jamaat, who I have no idea about. Is it possible they have come in contact with the first covid-19 victim?”

He also added that sharing the centre with forty others, with a single washroom and with six persons in one room “increases our vulnerability towards this infection”. Replying to a Tweet on the same issue faced at the quarantine centre, Deputy Commissioner Pulwama’s official handle wrote, “We are trying our best to make all quarantined comfortable. Can’t provide separate washroom for everyone.” 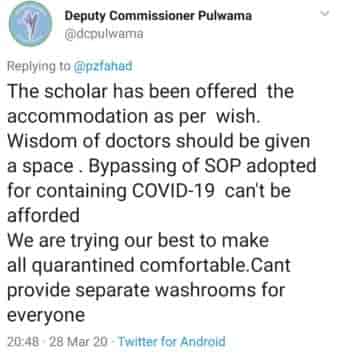 Mr. Manzoor had reportedly reached on 20 March from Delhi and, as he says in his post, “informed the local health officials who advised that I stay home quarantined”. He claimed that after eight days of quarantine, the administration wanted to move him to the Solace International School quarantine facility.

His family told The Indian Express that they haven’t heard from him since 31 March when he sent a message from the phone of another quarantined person.

However, Block Development Officer Aabid Malik, who is the nodal officer of the quarantine centre, told The Indian Express that an FIR was filed by the police because “he reportedly hit a policeman who had objected to him taking video with his phone… there were 15 witnesses to this (scuffle)”.

In the post, where the Pulwama Deputy Commissioner is also tagged, Mr. Manzoor claimed the nodal officer first agreed to keep him and his friend separate from others, but then “made a volte-face”. He also complained about lack of food and blankets to keep warm at night.

Mr. Malik alleged Manzoor gave everyone a hard time and “wasn’t cooperating with the doctors”. Acknowledging that there “are problems with the facility”, the officer told The Indian Express: “We don’t have hotels so we had to turn school building into a quarantine centre.’’ He said there were directions to put six people in one room, “but we offered him a separate room. He didn’t agree. He created lot of trouble…”

Soon after Mr. Manzoor’s post became public, the DC and SSP Pulwama came to the centre and spoke to him, says Mr. Malik. “He was making their video as well. They took his phone away. They took phones of both of them (his cousin),’’ he said. The officer said he along with the medical officer and the head of the police component wrote to the DC after he sought a report. “Everything that we have written is factually correct. I didn’t witness his scuffle with the policeman. I was told about it by the police.”

Medical officer Dr. Rafiq Ahmad also corroborated Mr. Malik’s statement and said: “He was instigating others inside the quarantine centre and was creating hurdles for us.’’