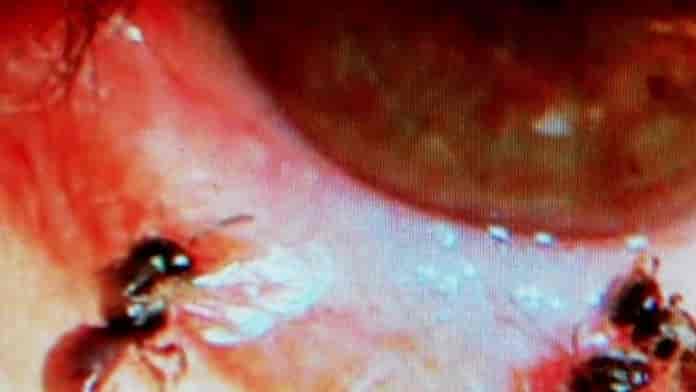 A Taiwanese woman complaining of an eye infection was found to have bees a living in her eyes, and drinking her tears, Science alert reported.

Four of these  Sweat bees(of the Halictidae family) had camped out under the 29-year-old’s left eyelid. .

The little bugs apparently took up residence in their new home when the woman – identified only by her surname He – was tending a family member’s grave and pulling out weeds. She felt something go into her eye, but was then unable to wash it out with water.

By the evening the eye was swelling up and stinging – as you might expect in hindsight – so she went for a check-up at Fooyin University Hospital.

That’s when head of ophthalmology Dr Hung Chi-ting made the bizarre and slightly sickening discovery: four bees under the eyelid, each around 4 mm (0.16 inches) in length, feeding off the moisture and salt of her tears.

“I saw something that looked like insect legs, so I pulled them out under a microscope slowly, and one at a time without damaging their bodies,” Hong told a press conference, as reported by The Guardian.

“Thankfully she came to the hospital early, otherwise I might have had to take her eyeball out to save her life,” Hung told news outlets including CNN.

Hung says the bees may have been trapped by a gust of wind and were unable to escape. They don’t usually attack people, but would have been attracted by the protein content of the tears, reports the BBC.

As for the bees, they’ve been kept alive, and are going to be used in future studies. If you want to try and avoid a similar fate in the future, these bees tend to usually live around graves and fallen trees.

For He, it’s a relief that the whole episode is over. “It was very painful,” she said. “Tears wouldn’t stop coming out of my eye. I was scared to death.”