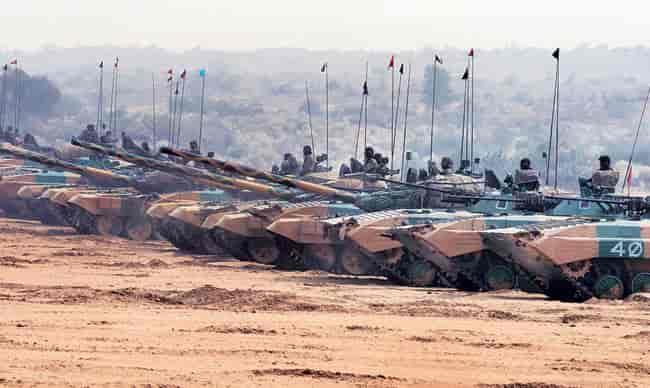 Saudi Arabia was the largest arms importer from 2014-18, which accounted for 12% of the total imports during the period leaving behind India.

“India was the world’s second largest importer of major arms in 2014–18 and accounted for 9.5% of the global total,” according to the latest report published by the Stockholm International Peace Research Institute (SIPRI) on Monday.

However, Indian imports decreased by 24% between 2009-13 and 2014-18, partly due to delays in deliveries of arms produced under licence from foreign suppliers, such as combat aircraft ordered from Russia in 2001 and submarines ordered from France in 2008, the report stated.

Russia accounted for 58% of Indian arms imports in 2014–18, compared with 76% in 2009-13. Israel, the U.S. and France all increased their arms exports to India in 2014-18. However, the Russian share in Indian imports is likely to sharply go up for the next five-year period as India signed several big-ticket deals recently, and more are in the pipeline. These include S-400 air defence systems, four stealth frigates, AK-203 assault rifles, a second nuclear attack submarine on lease, and deals for Kamov-226T utility helicopters, Mi-17 helicopters and short-range air defence systems. The report noted that despite the long-standing conflict between India and Pakistan, arms imports decreased for both countries in 2014-18 compared with 2009-13.

Meanwhile arch enemy and nuclear neighbour Pakistan stood at the 11th position accounting for 2.7% of all global imports. Its biggest source was China, from which 70% of arms were sourced, followed by the U.S. at 8.9% and, interestingly, Russia at 6%.

China, which has emerged as a major arms exporter, has increased its share by 2.7% for 2014-18 compared to 2009-13. Its biggest customers are Pakistan and Bangladesh.

As Indian imports reduced, the impact was on Russian exports of major arms, which decreased by 17% between 2009-13 and 2014-18. The report said this was partly due to “general reductions in Indian and Venezuelan arms imports”, which have been among the main recipients of Russian arms exports in previous years.